40k
57k
41k
9.6k
When Apple launched the iPad in 2010, it was supposed to become the company's next big thing after the iPhone. And for a while it actually looked that way. Once again, Apple had taken a concept that others had tried before, applied its secret sauce to make it “magical” and once again it had worked. The iPad was an instant success, and in its wake, the whole tablet market took off. Within three years, worldwide tablet shipments increased more than tenfold, reaching 220 million in 2013.

After peaking at 230 million shipped units in 2014, the tablet market cooled off significantly though. First came the realization that people would use their (unsubsidized) tablets longer than they would use their phones. Then smartphones grew larger and larger, putting the need to buy an additional device into question for many consumers. 2017 marked the third consecutive year of declining sales in the tablet market, a trend that continued through the first six months of 2018.

Despite the fact that Apple's iPad revenue has also come down to about two thirds of were it stood in 2013 and 2014, the company still is the undisputed leader in the tablet market. According to IDC, Apple sold 43.8 million iPads in 2017, beating its closest rival Samsung by nearly 20 million units. 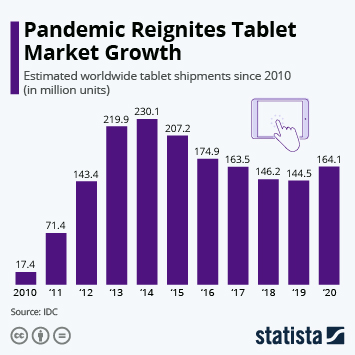