In a rare showing of consensus on a global security topic, and at a time of rising tensions between key parties, the United States, Russia, China, the UK and France have jointly agreed that “a nuclear war cannot be won and must never be fought”. The pledge, announced this week and the result of months of talks, was summarized by a senior U.S. state department official as: “an acknowledgement that it is something that we want to avoid”, adding that “particularly during a difficult time, I think (this) is noteworthy”.

Currently, there is estimated to be over 13 thousand nuclear warheads in the hands of nine countries. At the top of the list, as compiled by the Federation Of American Scientists (FAS), are of course Russia and the U.S. With a combined arsenal of close to 12,000, this hangover from the Cold War is still plain to see. The two have been undergoing programs of disarmament – a total of 3,660 are officially retired and awaiting dismantlement, but are currently still intact.

While the dismantling of these retired warheads is bringing the total number down, the FAS states that, while the U.S. is probably reducing its arsenal, “China, India, North Korea, Pakistan, Russia and United Kingdom are all thought to be increasing their stockpiles”. Despite the new pledge, the FAS warned in late 2021 that “instead of planning for nuclear disarmament, the nuclear-armed states appear to plan to retain large arsenals for the indefinite future. All continue to modernize their remaining nuclear forces… and all appear committed to retaining nuclear weapons for the indefinite future.” 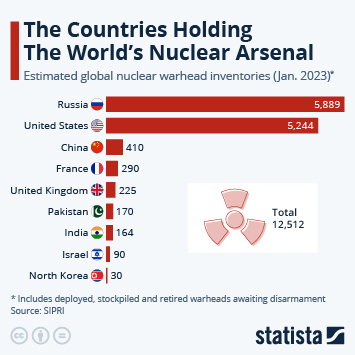