Published by
Petroc Taylor,
Oct 25, 2022
Dropbox is a San Francisco-based technology firm offering cloud file storage. Dropbox was founded in 2007 by MIT students Drew Houston and Arash Ferdowsi and made available to the public the following year. Dropbox’s core proposition at launch was the ability to sync desktop files to the cloud via a client that integrates with a device’s native file explorer. Dropbox users can access their files from any compatible device and can seamlessly share files with other users. In response to mounting competition in the cloud storage market over the past decade, Dropbox has sought to augment its software offering by acquiring several emerging tech firms and by placing an emphasis on workplace collaboration. Dropbox has been a “virtual first” company since late 2020, making remote work the primary format for its 2,667 employees.

Dropbox operates a “freemium” business model, enticing new users with two gigabytes of free storage while offering a range of subscription models to expand capacity, including those aimed specifically at businesses. Initial funding for Dropbox was secured from Silicon Valley startup accelerator Y Combinator in 2007, with prominent venture capital firms such as Index Ventures and Sequoia investing in subsequent years to allow rapid growth. Annual revenue for 2021 was reported at 2.16 billion dollars, up from 1.39 billion dollars in 2018, the year of Dropbox’s initial public offering (IPO). Despite Dropbox posting consecutive net losses between 2015 and 2020, it recorded a net profit of 335.8 million U.S. dollars for 2021.

While Dropbox’s early competition was limited to rival storage-focused startups such as Box, the market had grown to include each of the major players in tech. Google Drive, Microsoft OneDrive and Apple iCloud have each enabled users to enjoy cloud file storage as part of a broader software offering, allowing deep integration in their respective ecosystems. Dropbox has incrementally expanded its platform in order to stay competitive, adding features such as the ability to automatically sync photographs or videos from a camera, as well as the collaboration functions that have seen increased demand amid the COVID-19 pandemic.

Dropbox’s drive to stay competitive has been supported by acquisitions. Early acquisitions included the tablet-focused advertising firm TapEngage and the mobile document editing firm CloudOn. Dropbox’s largest reported acquisition was that of electronic signature firm HelloSign for 230 million U.S. dollars in 2019. This purchase enabled Dropbox to tap into a 4.05 billion U.S. dollar industry slated for strong growth, though competition has proved tough with fellow San Francisco company DocuSign dominating the market. Dropbox’s most recent purchase was the secure document-sharing platform DocSend, bought for 165 U.S. dollars in 2021.

In the following 4 chapters, you will quickly find the 23 most important statistics relating to "Dropbox Inc.". 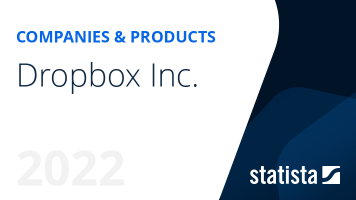 The most important key figures provide you with a compact summary of the topic of "Dropbox Inc." and take you straight to the corresponding statistics.