Published by Thomas Alsop, Jun 23, 2020
HP Inc is an American technology company that was formed in November 2015, following the break-up of its predecessor, Hewlett-Packard Company. HP Inc's pedigree stretches back to 1935, when the parent company was founded in the garage of William Hewlett and David Packard.
Initially producing a range of electronic test equipment, HP Co rose in the intervening years to become one of the leading manufacturers of personal computers worldwide and a global manufacturer of servers, storage devices, and networking equipment, as well as delivering a variety of IT services for both consumers and enterprises. With HP Co's closure, HP Inc inherited the personal computer and printer departments while enterprise software, servers, and storage went to the newly formed Hewlett Packard Enterprise (HPE). Both companies continue to generate multi-billion-dollar revenues, with HP Inc earning revenues of 58.76 billion U.S. dollars in 2019. The company employs 56 thousand people worldwide as of 2019. The company also remains largely profitable, posting net earnings of 3.15 billion U.S. dollars in 2019.

The core of HP Inc's business remains personal systems and the company appears to have ridden the separation without too much disruption to its market position. HP Inc remains one of the major players in the global PC market and its historical market share of around 15 to 25 percent continues into 2020. The company shipped 58 million personal computers in 2019. In addition to its success in the PC segment, the company also maintains a healthy market share in sales of hardcopy peripherals. Both HP Inc and HPE will benefit from the continued strength of the Hewlett Packard brand, which ranks as one of the most valuable brands worldwide.

In the following 4 chapters, you will quickly find the 29 most important statistics relating to "Hewlett Packard Inc (HP Inc)".

The most important key figures provide you with a compact summary of the topic of "Hewlett Packard Inc (HP Inc)" and take you straight to the corresponding statistics. 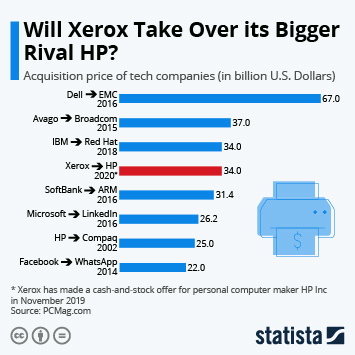