Published by
Justina Alexandra Sava,
Jun 23, 2022
Hewlett Packard Enterprise (HPE) is an American technology company formed on November 1, 2015, due to the break-up of the IT giant Hewlett-Packard Company. Along with HPE, the other company that emerged from the split was HP Inc. The history of the Hewlett Packard name goes all the way back to 1935 when the original organization was founded in the garage of William Hewlett and David Packard. Initially producing a range of electronic test equipment, HP rose in the intervening years to become one of the leading manufacturers of personal computers (PCs) worldwide. It also turned into a paramount manufacturer of servers, storage devices, and networking equipment, all while delivering a variety of IT services for both consumers and enterprises.

Following HP Co's transition to HP Inc with personal computer and printer departments, the enterprise software, servers, and storage went to the newly formed Hewlett Packard Enterprise (HPE). In 2017, HPE spun off its software business and merged it with Micro Focus. In addition to this, HPE also spun off its enterprise services business segment, merging it with Computer Sciences Corporation (CSC) to form DXC Technology. Both HP Inc and HPE continue to bring in multi-billion-dollar revenues, with HPE generating revenues of 27.78 billion U.S. dollars in 2021. HPE's size and continuous expansion underline the fact that they hold sizeable positions in several global markets. The most notable markets are servers and storage, where HPE faces competition from other leading technology firms such as Dell Technologies or Dell EMC, as well as IBM, NetApp, and Lenovo.

In the following 5 chapters, you will quickly find the 23 most important statistics relating to "Hewlett Packard Enterprise (HPE)". 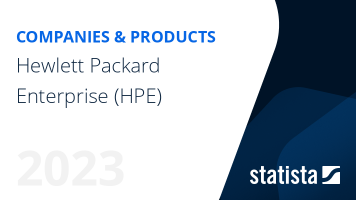 The most important key figures provide you with a compact summary of the topic of "Hewlett Packard Enterprise (HPE)" and take you straight to the corresponding statistics.