Simply put, computer peripherals are any device that can be either internally or externally connected to a computer and from then used in the transfer of data to or from that computer. Computer peripherals help to enhance the computer's functionality and because of their usefulness in daily life, make up a sizeable portion of information technology (IT) spending worldwide. While the computer peripherals market is comprised of a plethora of different devices, its main segments are PC monitors and projectors, printers and copiers, storage devices, and computer keyboards.

In 2023, PC monitors and projectors are expected to bring in 31 billion U.S. dollars' worth of revenue worldwide. The shift to working from home after the pandemic and the continued remote or hybrid work preference has bolstered the market, with many workers requiring multiple monitors in their daily work routine. The price of PC monitors and projectors is around 157 U.S. dollars per unit, making them one of the pricier computer peripherals on the market.

A peripheral segment that is beginning to garner greater attention is that of VR headsets. In 2023, VR headset revenues will start to approach 10 billion U.S. dollars, representing revenue growth of around 14 percent compared to the previous year. VR headsets consist of a head-mounted display (HMD) - a wraparound headset that does not allow light or images from the real world to interfere with the virtual one. Notable VR headset brands include Meta Quest (previously under the Oculus branding) and ByteDance’s Pico headset.

Storage peripherals are anything used to store and record data from the computer and include the likes of internal and external hard drives, CD-ROM/DVD drives, and flash memory drives. The global revenue from storage units is expected to reach over 40 billion U.S. dollars in 2023, making it one of the largest computer peripheral segments. Like the other peripherals, storage devices saw an increase in growth during the pandemic.

With many kinds of computer peripherals, there is also a plethora of companies that produce them. However, one of the key players that have broken into different areas of the computer peripheral market is Logitech. The company specializes in gaming devices, video collaboration devices, keyboards and combos, and much more. Popular vendors in the peripheral market that specialize in PC monitors include Dell, Lenovo, and TPV, while hardcopy peripherals are dominated by vendors such as HP, Canon, and Epson.
This text provides general information. Statista assumes no liability for the information given being complete or correct. Due to varying update cycles, statistics can display more up-to-date data than referenced in the text.

Thomas Alsop
Research expert covering the global hardware industry
Get in touch with us now
Published by Thomas Alsop, Sep 27, 2022

Revenue of the global PC monitor and projector market 2014-2027

Worldwide printer and copier revenue from 2014 to 2027 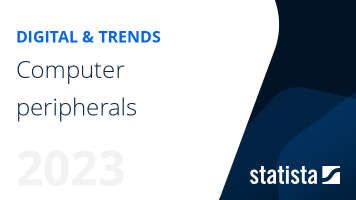 The most important key figures provide you with a compact summary of the topic of "Computer peripherals" and take you straight to the corresponding statistics.