Published by
Yihan Ma,
Apr 19, 2022
The world has witnessed the astonishing growth of China’s economy since entering the 21st century. Half a century ago, most of the country’s population still suffered from poverty and starvation. Today, China is home to more than 40 percent of the global wealth middle class. The soaring disposable income and spending power have led to a flourishing luxury goods market. In 2021, China was the second-largest personal luxury goods market worldwide and the most prominent luxury goods market in APAC.

Chinese luxury consumers shopped a wide range of products, including watches, jewelry, fashion, cosmetics, fragrances, leather goods, and eyewear. Among all aforementioned categories, watches and jewelry contributed to nearly half of China’s luxury goods sales revenue. In a survey among over 1,500 luxury goods consumers from mainland China and Hong Kong, respectively, 86 and 85 percent of the respondents said they bought luxury watches and jewelry offline. For decades, brick-and-motor stores dominated China’s luxury goods retail market. The world’s top ten most valuable luxury brands all have their own stores in China, distributed mostly in economically developed regions.

Made in China, sold in China

There was a time when you stepped inside a luxury store anywhere in the world, no matter New York, Milan, or Dubai, Chinese shoppers are bound to be spotted. In 2015, more than three-fourths of the luxury consumption made by Chinese consumers happened overseas. However, the share dropped sharply due to rising spending limits in the Hainan duty-free zone and the COVID-19 travel restrictions. In 2021, it was estimated that domestic retail accounted for up to 98 percent of the luxury sales in China. In 2021, Hainan offshore duty-free recorded its highest sales since opening, with more than 80 percent yearly growth.

The transition from abroad to China happened not just in shopping locations but also in preferred brands. Along with the rising cultural confidence and patriotism, an absolute majority of luxury consumers in China said they would support the domestic luxury businesses if the quality and the price were at the same level as foreign brands. Compared to the global luxury conglomerate, shoppers in China believed that local brands would better understand the customers’ tastes and perform more efficiently in after-sale care.

In the following 4 chapters, you will quickly find the 24 most important statistics relating to "Luxury goods market in China". 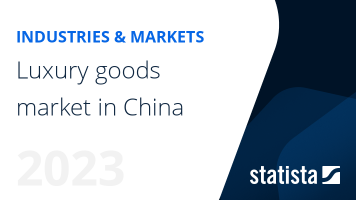 The most important key figures provide you with a compact summary of the topic of "Luxury goods market in China" and take you straight to the corresponding statistics. 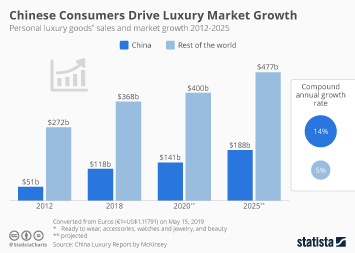