Published by Statista Research Department, Dec 1, 2020
Specialty foods offer customers an additional value, which may be based on characteristics such as ethnic or cultural origin, extraordinary ingredient usage or innovative packaging. These products often command a premium price.
Total specialty food sales amounted to about 127 billion U.S. dollars in the United States in 2016. Most of consumers purchased their specialty foods in mainstream stores, followed by specialty food stores and natural food stores in 2016. Based on retail-tracked data, cheese and cheese alternatives generated the largest amount of sales in 2016 within the category.

The most recent consumer survey revealed that more people bought foods with an added value in 2016 compared to the prior year. Millennials were the most likely generation to try specialty foods in that year. The majority of shoppers reported that their purchase decision of specialty foods is highly influenced by their desire to try new things. Exciting new food experiences and quality ingredients were also cited as key purchase factors.

In the following 3 chapters, you will quickly find the 16 most important statistics relating to "Specialty Foods Market". 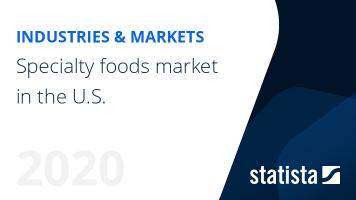 The most important key figures provide you with a compact summary of the topic of "Specialty Foods Market" and take you straight to the corresponding statistics.