Alcohol use in the United States - Statistics & Facts

Published by
John Elflein,
Jul 27, 2022
It is long known that alcohol can pose a significant risk to human health, but it is still consumed in large amounts worldwide. The World Health Organization (WHO) estimates that around three million deaths are related to harmful use of alcohol worldwide per year – that is over 5 percent of all deaths worldwide. Alcohol consumption is associated with many diseases, such as several types of cancer, cirrhosis of the liver, and cardiovascular diseases. The death rate due to alcohol use in the United States has increased over the past couple decades, and although drinking rates among adolescents and younger people have decreased in recent years, a large share of the population binge drinks and many have an unhealthy dependence on alcohol.

What is binge drinking?

Alcohol use among younger people can be particularly troublesome, but rates of alcohol use among youth in the U.S. have steadily decreased over the last few decades. In 2021, the lifetime prevalence of alcohol use among those in grades 8, 10 and 12 stood at 36.3 percent, a significant decrease from a prevalence rate of 80 percent in 1991. Among those aged 12 to 20 years, around 15.6 percent of males and 16.7 percent of females were current alcohol drinkers. Given the reputation of colleges concerning partying and alcohol use it is no surprise that rates of binge drinking are higher among those aged 18 to 22 years who are enrolled in college than those who are not enrolled. However, following a similar trend as seen among high school students, binge drinking rates among those aged 18 to 22 years have dropped over recent years for both those enrolled in college and those who are not.

The health impacts of alcohol use

Despite its widespread consumption and the massive industry behind it, alcohol use can come with very serious health consequences. The death rate due to alcohol-related liver cirrhosis in the United States has steadily increased over the past couple decades with 7.3 deaths per 100,000 population in 2019, compared to a rate of 4.3 deaths per 100,000 population in the year 2000. Alcohol-related cirrhosis accounts for almost half of all liver cirrhosis deaths in the United States, with almost 69 thousand alcohol-related cirrhosis deaths recorded in the period 2017-2019. Alcohol use can also increase the risk of developing several types of cancer, including female breast cancer, colon and rectum cancer, and liver cancer. The states with the highest rates of new alcohol-associated cancers are Kentucky, Louisiana, and Mississippi.

In the following 8 chapters, you will quickly find the 43 most important statistics relating to "Alcohol and health".

Statistics on the topic
Per capita alcohol consumption in the United States (in gallons of ethanol)
2.45
State with the highest binge drinking prevalence
Wisconsin
Death rate due to alcohol in the U.S. (per 100,000 population)
13.1

The most important key figures provide you with a compact summary of the topic of "Alcohol and health" and take you straight to the corresponding statistics.

Substance abuse treatment and rehabilitation in the U.S. 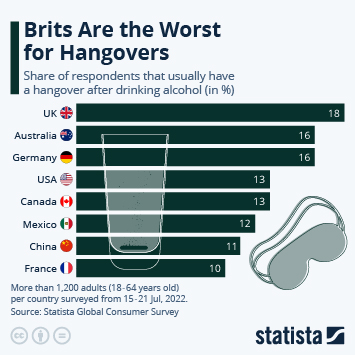 Brits Are The Worst for Hangovers 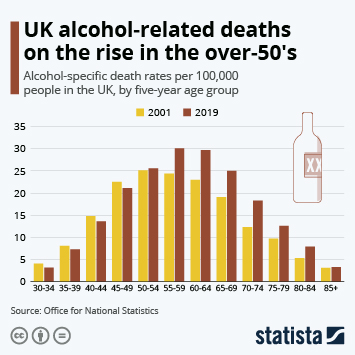 UK alcohol-related deaths on the rise in the over-50's