Published by Jan Conway, Dec 7, 2021
The alcoholic beverage market includes beer, wine, and spirits. In the United States, this market has been shifting. While beer is still the dominant beverage consumed by Americans, its primacy is waning. Where 20 years ago beer constituted over half the market for alcoholic beverages, today its market share has shrunk to 44 percent. Spirits have been the main beneficiary of this decline, having grown to a 39 percent share of the market.

In 2020, sales of alcoholic beverages declined 12 percent after a decade of consistent growth. This was most likely because of the restrictions in place because of the COVID-19 pandemic. On-premise sales totaled 67 billion U.S. dollars that year, just 30 percent of all sales. This was a boon for online sales of alcohol, which grew by 12 percent in 2020. Beer saw a sharp contraction in revenue, declining by 18 percent in 2020. Domestic beer remains the largest segment with a 68 percent share of the market. Retail sales of wine also dipped in 2020 to 66.8 billion dollars, falling 10 percent compared to 2019. Despite this decline, direct to consumer sales of wine grew by over 15 percent, representing consumers' turn to ecommerce during the pandemic. In distilled spirits, retail sales totaled over 86 billion U.S. dollars. Vodka was, by far, the largest segment in the spirits industry, with consumer spending reaching 26.6 billion dollars, almost triple that of straight American whiskey, the next best selling category.

Alcohol consumption in the United States has been steadily growing for years. Per capita, Americans now consume 2.38 gallons of alcohol, a growth of almost nine percent compared to 20 years ago. Consumption of beer declined in 2020, standing at 68.6 liters per capita, a reduction of around 8.5 percent. This decline, although steeper than previous years, follows an ongoing trend of reduced beer consumption. In contrast, average wine consumption in the U.S. continued its upward trend, reaching over three gallons per person. Distilled spirits likewise continued to grow in consumption, with Americans drinking over 1.8 gallons in 2020.

In the following 4 chapters, you will quickly find the 33 most important statistics relating to "Alcoholic Beverages Industry in the United States". 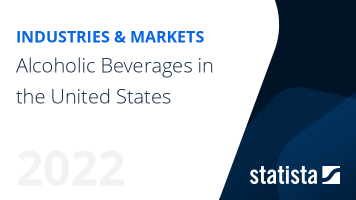 The most important key figures provide you with a compact summary of the topic of "Alcoholic Beverages Industry in the United States" and take you straight to the corresponding statistics.

Wine in the United Kingdom 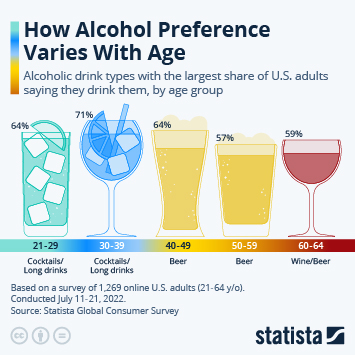 How Alcohol Preference Varies With Age