Published by H. Plecher, Feb 14, 2019
Located in the Caribbean, Cuba consists of the main island of Cuba, the Isla de la Juventud, and several archipelagos. Cuba is the largest island in the Caribbean and the second most populous after Hispaniola. The island of Cuba lies to the south of the Unites States, to the southwest of the Bahamas, east of Mexico, north of the Cayman Islands and Jamaica and northwest to Haiti and the Dominican Republic. In the northwest of the island lies Havana, the country’s capital and largest city by far. Despite the significantly low population growth since 2008 and a slightly increasing fertility rate , the total population of Cuba has remained constant over the past decade. Due to increasing life expectancy in Cuba, the average age of the population is increasing.
On a historical note, Cuba achieved its independence from Spain in 1898. Over 60 years later, in 1959, Fidel Castro came into the presidency after overthrowing the current government. Castro established a government based on the principles of communism, which theoretically include equality, health care services available from the government, and making educational services public and mandatory for all citizens. Following a trade embargo imposed by U.S. President Kennedy and the United States in 1962, Cuba lost trade relations with the U.S. and its subsidiaries. Consequently, Cuba was forbidden to import or export crucial alimentary and medical supplies and relied heavily on Soviet backing, including annual subsidies worth over 4 billion U.S. dollars. After the fall of the Soviet Union in 1991, Cuba struggled once again to maintain its economy due to the discontinued financial aid from the Soviet Union.

Despite the economic sanctions, the Cuban economy has been growing over the past decade. Between 2005 and 2015, gross domestic product has more than doubled. Subsequently, there has been a positive growth rate of the real GDP during that time. Today, Cuba still relies heavily on imported goods. China, Cuba’s most important import partner in 2015, provides around a third of all imports. As a result of the imposed embargo by the United States, which means severe restrictions to exports, and Cuba's high value of imports, Cuba's trade balance is perpetually in the red.

In the following 4 chapters, you will quickly find the {amountStatistics} most important statistics relating to "Cuba".

Cuba and the coronavirus

The most important key figures provide you with a compact summary of the topic of "Cuba" and take you straight to the corresponding statistics. 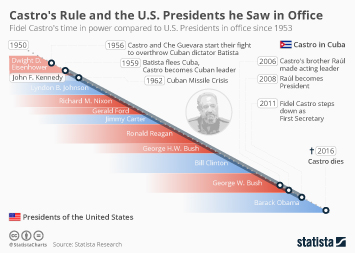 Castro Saw 11 U.S. President’s in Office During his 50 Year Rule