The Caribbean is, also online, a place of contrasts. This part of the Americas is home to nearly 54 million internet users, out of which 22.2 million are on social media. However, the myriad of cultural and political landscapes across the Caribbean Sea diversifies the use of social networks within its dozens of countries and territories. Cuba and Haiti, for instance, rank second and third in number of internet users in the region, respectively. Nonetheless, Cuba’s poor-quality internet connections and Haiti’s persisting social turmoil hinder the potential of these nations for social media. Thus, this segment’s most consolidated markets in the Caribbean are the Dominican Republic, Puerto Rico, and Jamaica.

Dominican Republic: the largest one

The Dominican Republic alone accounts for 31.5 percent of all active social media users in the region. Since Facebook dominates the Caribbean market altogether, Mark Zuckerberg’s flagship plays a major role also in that country. It concentrated over 80 percent of all mobile social media site visits in the Dominican Republic throughout 2020. At the beginning of 2021, it was estimated that there were more than six million Facebook users in the Dominican Republic – an increase of 124 percent compared to the 2.7 million users counted four years earlier. The figure was projected to surpass 7.5 million users by 2025.

This unincorporated territory of the United States is home to approximately 10.5 percent of Caribbean social media users. Besides Facebook, Pinterest and Twitter are also popular in the self-proclaimed ‘island of enchantment,’ each accounting for about seven percent of all social media website visits in Puerto Rico in 2020. In a territory famous for its music genres, from salsa to reggaeton, all the five most followed Twitter profiles belong to recording artists. After topping the charts for decades, former Menudo star Ricky Martin topped the Twitter ranking in Puerto Rico with more than 20 million followers in early 2021.

Despite its prominence in the region, Facebook is not as omnipresent in Jamaica, where it accounted for less than 55 percent of all social media site visits in 2020. However, Facebook, Inc. also controls the company that ranked second: Instagram, with 16.2 percent of the social media website visits in Jamaica. While the picture-sharing mobile app evolved into a multifunctional platform, its popularity in that Caribbean country skyrocketed. Between 2017 and 2021, the estimated number of Instagram users in Jamaica increased by over 150 percent. This island nicknamed ‘the Rock’ by its citizens has shown solid growth in social media adoption so far.
This text provides general information. Statista assumes no liability for the information given being complete or correct. Due to varying update cycles, statistics can display more up-to-date data than referenced in the text.

Country with the most internet users
Dominican Republic

The Caribbean: internet users 2021, by country or territory

Mobile internet penetration in the Caribbean
77%

The Caribbean: internet users 2021, by country or territory

Latin America and the Caribbean: share of web traffic 2022, by device 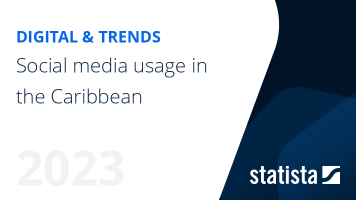 The most important key figures provide you with a compact summary of the topic of "Social media usage in the Caribbean" and take you straight to the corresponding statistics.