Nepal is a small landlocked nation in South Asia. It is located in the Himalayas and bordered to the north by the People’s Republic of China, and to the south, east, and west by the Republic of India. Is it estimated that in 2017, the total population of Nepal amounted to almost 30 million. The vast majority of the Nepalese people live in Kathmandu, the nation’s capital and largest city. Over the last decade, urbanization has been increasing in Nepal, with more and more people moving to the cities to look for better living conditions and work. However, more than half of the population is employed in the agricultural sector.
Nepal was a monarchy throughout most of its history and only became a republic in May 2008. It is one of the poorest nations in the world with a very low income. Previously, it was ruled by the Shah dynasty. Today, Nepal is led by a Maoist-dominated government, but the nation is still surrounded by political instability. A new constitution in Nepal has yet to be made.

As most of its inhabitants are farmers, the nation mainly depends on agriculture as its main source of income. According to the UN, around 40 percent of the Nepali population lives in poverty. High inflation and unemployment rates contribute to the high poverty. During the global financial crisis in 2009, Nepal's inflation rate soared to over 12.6 percent, and despite a small decrease, it is still levelling at around the 10 percent-mark today, estimated to fall to below 6 percent at the end of the decade. In 2016, Nepal was among the 20 countries with the highest inflation rate, a dubious honor that luckily was not repeated in 2017. In addition, The Nepalese economy has reported a trade deficit for the past decade. In 2016, Nepal estimatedly imported 9.65 billion U.S. dollars worth of goods, but only an estimated 0.7 billion U.S. dollars worth of goods were exported in the same year.

But Nepal not only has to deal with economic hardship: On April 25, 2015, Nepal was struck by an earthquake which killed more than 7,000 people, including 54 foreigners, and left more than 14,000 people injured. This earthquake is said to be the most powerful natural disaster since the 1934 Nepal-Bihar earthquake. Along with the earthquake in the capital and Gorkha district, there was a massive avalanche on Mount Everest which was triggered by the tremors and killed over 19 people. Nepal now has to rely heavily on economic support and humanitarian aid from nations around the world to rebuild infrastructure and shelter for the people whose homes were destroyed by the earthquake and aftershocks. With this natural catastrophe destroying a lot of the infrastructure, the country's trade deficit is probably going to grow even further over the years to come, putting more strain on the country's struggling economy.

Nepal and the coronavirus 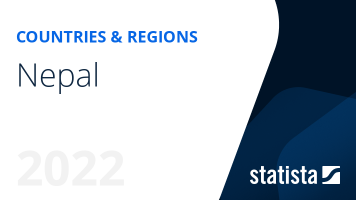 The most important key figures provide you with a compact summary of the topic of "Nepal" and take you straight to the corresponding statistics.