From arcade game Pac-Man in 1980 to mobile gaming hit Genshin Impact in 2020, in an industry predicted to be worth more than 197 billion U.S. dollars in 2022, the Asia-Pacific region has been an important market from the very beginning. As the number of video gamers worldwide approaches three billion, APAC is home to over half of these gamers. Aside from its enormous user base spanning all age groups, the region is home to various long-established industry players and is a hub for innovation and new trends. Along with the increasing number of smartphone users in APAC, the mobile gaming market value has soared in recent years. This change in gaming accessibility may significantly change the region's gaming landscape.

Home to Sony's PlayStation and Nintendo's various consoles, Japan is among the world's most well-established gaming hardware markets. In 2022, the PlayStation series 3, 4, and 5 are projected to generate a global sales revenue of over nine billion U.S. dollars. Meanwhile, the Nintendo Switch, a hybrid handheld and TV gaming console, has recently surpassed 100 million lifetime unit sales. As for mobile games, Tencent Games, a subsidiary of Chinese tech giant Tencent, has dominated the industry in recent years. The company's most popular titles include Honor of Kings and PlayerUnknown's Battlegrounds (PUBG), both of which have generated over one billion U.S. dollars in revenue.

The future is mobile

Despite being a relative newcomer to an industry built initially on arcade, PC, and console gaming, the mobile gaming market in APAC is the region's most significant gaming segment by far. The mobile gaming industry boasts a wide variety of genres, ranging from casual puzzles to competitive shooters like PUBG, therefore appealing to users of all ages and interests. Furthermore, many of the most popular games are initially free-to-play (F2P), with one example being miHoYo's hit fantasy role-playing game (RPG) Genshin Impact. The RPG has generated monthly in-app purchase (IAP) revenues of over 100 million U.S. dollars, giving players the opportunity to win items and characters in a so-called gacha lottery system.

The competitive and social nature of gaming

More than before, the ongoing coronavirus pandemic has led gamers to frequently seek connection and interaction with others via online multiplayer gaming, chats, and streaming platforms. One such platform is Garena+. Operated by Singapore-based tech conglomerate Sea Limited, the network focuses on the Southeast Asian market and has over 73 million paying users. The rising popularity of eSports - competitive gaming events - has also fueled the gaming and streaming market. Several new revenue channels have opened up from the esports segment, with sponsorship and advertising alone generating over 290 million U.S. dollars in 2021.
This text provides general information. Statista assumes no liability for the information given being complete or correct. Due to varying update cycles, statistics can display more up-to-date data than referenced in the text.
Published by Leander von Kameke, Jul 6, 2022

Number of gamers in Asia
1.48bn

Revenue of video games market in Southeast Asia 2018-2027, by country 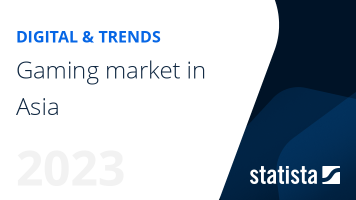 The most important key figures provide you with a compact summary of the topic of "Gaming market in the Asia-Pacific region" and take you straight to the corresponding statistics.