Deutsche Telekom AG is a German-based telecommunications company and a major player in the global telecommunications market. Formerly part of the federally owned Deutsche Bundespost (German Federal Post), Deutsche Telekom was privatized in 1996 and has since grown to become one of the most valuable telecom brands in the world. It is currently headquartered in Bonn. Around the world, Deutsche Telekom operates holding companies under the names of T-Mobile, T-Systems, T-Online and T-Home. In the U.S., T-Mobile US has established itself as one of the largest U.S. telecommunications providers, with more than 70 million mobile subscribers.
Deutsche Telekom’s net revenue has gradually increased over the past five years to almost 75 billion U.S. dollars in 2017. Approximately one third of the company's revenue is earned domestically, where the company is the most dominant player. Besides Germany and Europe in general, North America is an important market for the company as well, as this region accounted for almost 50 percent of its global revenue in 2017. The company is also one of the largest employers in the world, employing more than 200,000 people. About half of these employees are located in Germany. Deutsche Telekom's global reach contributes to its strong brand. In 2018, the company’s estimated brand value stood at around 40 billion U.S. dollars.

The company offers several products and services, from fixed and mobile telephone services to IT services and digital TV solutions. Again, Deutsche Telekom is particularly strong in its domestic market, as Deutsche Telekom’s market share of landline telephone connections in Germany is close to 50 percent. Their market share of broadband connections in the country added up to around 40 percent in early 2017.
This text provides general information. Statista assumes no liability for the information given being complete or correct. Due to varying update cycles, statistics can display more up-to-date data than referenced in the text.
Published by S. O'Dea, Sep 6, 2018

Revenue of the leading telecommunications companies in Germany 2008-2021 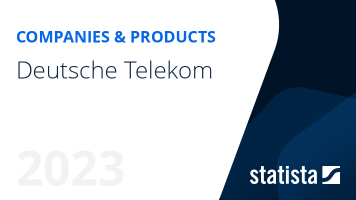 The most important key figures provide you with a compact summary of the topic of "Deutsche Telekom AG" and take you straight to the corresponding statistics.