History of T-Mobile in the United States

The company began in 2001 following the purchase of VoiceStream Wireless PCS by German telecommunications company Deutsche Telekom. Trading as T-Mobile USA, the company was the target of a AT&T takeover bid in 2011, but the deal fell through after rejection by U.S. regulators. In 2013, T-Mobile USA's merger with MetroPCS Communications led to the company's renaming as T-Mobile US, Inc. In April, 2020, T-Mobile US and Sprint Corporation completed their merger and T-Mobile is now the whole owner of Sprint. The company provides wireless voice, messaging, and data services in the United States, Puerto Rico, and the U.S. Virgin Islands, under the T-Mobile, MetroPCS, and GoSmart Mobile brands. Sprint becomes a subsidiary of T-Mobile after the acquisition, until the Sprint brand is phased out.

T-Mobile currently has more than 109 million subscribers, of which 88 million are postpaid customers. As of the first quarter of 2022, the company had a monthly average revenue per user (ARPU) of 48.41 U.S. dollars for postpaid customers, and a churn rate of 0.93 percent. Overall, T-Mobile receives customer satisfaction index score of 74 for its mobile network quality, third behind Verizon Wireless and AT&T.

In the following 5 chapters, you will quickly find the 32 most important statistics relating to "T-Mobile US". 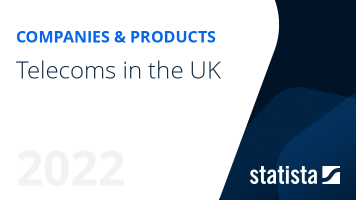 The most important key figures provide you with a compact summary of the topic of "T-Mobile US" and take you straight to the corresponding statistics.

Mobile communications in the United States