Published by S. O'Dea, Sep 15, 2020
Rogers Communications is a Canadian communications and media company headquartered in Toronto, Ontario. Along with Bell Canada, the company is one of the largest telecommunications operators in Canada, generating 15.1 billion Canadian dollars in generating 15.1 billion Canadian dollars in revenue in 2019 and employing 25,300 people.
Rogers Communications was founded by Canadian entrepreneur Ted Rogers who followed in the footsteps of his father, Edward Rogers, a pioneer in the radio industry in Canada. Just like his father, Ted Rogers had roots in radio, and developed an interest in cable television and broadcasting later on. In 1960, Ted Rogers founded Rogers Radio Broadcasting Ltd. Over five decades, Rogers Communications expanded its portfolio to four segments -- Wireless, Cable, Business Solutions and Media – and established the company as Canada's largest provider of wireless services. Bell Canada and Telus are the company’s main competitors in mobile communication in Canada. In the Canadian television market, Bell Canada is now the market leader, while Shaw and Rogers fight for the second place.

In the following 4 chapters, you will quickly find the 25 most important statistics relating to "Rogers Communications". 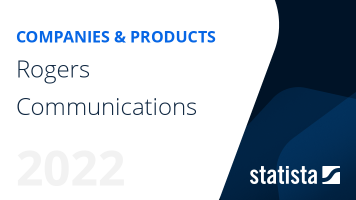 The most important key figures provide you with a compact summary of the topic of "Rogers Communications" and take you straight to the corresponding statistics.