Sprint: One of the former ‘Big Four’

In 2019, the company had a customer base of almost 55 million subscribers across its postpaid, prepaid, and wholesale and affiliate platforms, of which more than 33.84 million were postpaid retail customers. During 2019, Sprint's prepaid business generated 3.75 billion U.S. dollars in revenue.
DISH Network Corporation acquired Sprint's prepaid business - Boost Mobile - under the terms of the T-Mobile US merger, paying 1.4 billion U.S. dollars to acquire the business including approximately 8.27 million subscribers as of the fourth quarter of 2019. This effectively established DISH as the third-largest prepaid wireless operator in the United States overnight.

From TV to Telco: DISH rolling out 5G

DISH commenced generating revenue almost immediately from Boost Mobile. In the second quarter of 2020 the company reported earning 1.28 million U.S. dollars from wireless services, a figure that jumped to 1.34 billion U.S. dollars in the third quarter. DISH wireless subscriber numbers have fallen over the past three quarters, declining from 9.42 million subscribers in the third quarter of 2020 to 8.89 million subscribers in the first quarter of 2021. The company recently announced that it plans to start deploying its network in the third quarter of 2021, starting the build of its 5G network on a city-by-city basis using the spectrum it currently owns. Under the terms of the acquisition, DISH is required to build out its 5G network to the extent that it covers 70 percent of the U.S. population by 2023. Further reading on the merger is available from the Statista Dossier Plus, Global telecommunications industry: financial insight.
This text provides general information. Statista assumes no liability for the information given being complete or correct. Due to varying update cycles, statistics can display more up-to-date data than referenced in the text.
Published by S. O'Dea, Jun 11, 2021

Revenue of the Sprint Corporation by segment 2011-2019 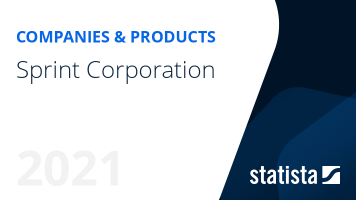 The most important key figures provide you with a compact summary of the topic of "Sprint Corporation" and take you straight to the corresponding statistics.