Language and culture of Aboriginal peoples in Canada - Statistics & Facts

Published by
Lucie Jeudy,
Jul 6, 2021
Aboriginal peoples in Canada are comprised of three main groups: the Métis, Inuit, and First Nations. The Métis people originated from the intermarriage of First Nations people with primarily French and Scottish traders during the height of the fur trade in Canada. Today, the largest population of the Métis lives in Alberta. The Inuit people live throughout much of the Canadian arctic and make up the majority of the population in the Nunavut territory. First Nations people are all Aboriginal people in Canada who are neither Inuit nor Métis. They are comprised of over 600 distinct bands throughout Canada.
Canadian Aboriginal peoples’ cultures and languages still survive in Canada to this day (though many languages are in danger of going extinct), despite controversial Canadian polices such as the establishment of the residential school system (a system of forced integration) that Canada publicly apologized for in 2008. Today, there are over 60 recognized aboriginal languages spoken among these groups stemming from over a dozen language families. The Algonquin family maintains, by far, the greatest amount of speakers in Canada (with the Cree language being the most common), over 4 times that of Inuit, the next most common language family. Of those who can speak an Aboriginal language it is often the primary language spoken in the home, eclipsing the official Canadian languages of French and English. The Inuit people are the most able to converse in Aboriginal languages with almost two-thirds of the population able to do so. Conversely, only 1.7 percent of the Métis population is able to hold a conversation in an Aboriginal language.

The trend is similar for cultural traditions and participation in traditional arts and craft. Nearly 60 percent of Inuit hunt, fish, or trap during the year, almost double the rate of those from First Nations and the Métis. Furthermore, over 26 percent of Inuit made clothing or footwear during the year, nearly triple that of First Nations peoples. Maintaining cultural traditions is also of great importance to Aboriginal peoples living in Canada’s cities. In the 2010 Urban Aboriginal Peoples Study, 60 percent of those polled said language was the most import part of the culture to pass on to future generations with customs and traditions of the culture coming in at a close second of 58 percent.

In the following 3 chapters, you will quickly find the 25 most important statistics relating to "Language and culture of Aboriginal peoples in Canada".

Statistics on the topic
Number of registered Indians in Canada
1,008,955
Aboriginal population of Ontario
236,680
Number of Indian Bands in British Columbia
199

The most important key figures provide you with a compact summary of the topic of "Language and culture of Aboriginal peoples in Canada" and take you straight to the corresponding statistics.

Languages in the United Kingdom 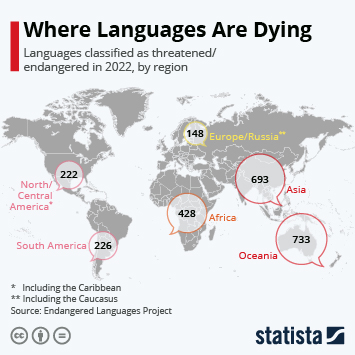