Formerly known as Kellog Brown & Root, KBR Inc. is one of the largest engineering, procurement, and construction companies in the United States today. The KBR Tower, its headquarters, is located in Houston, Texas. KBR had stakes in several industries from the beginning: In 1962, Halliburton Energy Services acquired Brown & Root, a company created in 1919, and became primarily involved in building infrastructure for the Navy during the Vietnam War. In 1989, Halliburton acquired C.F. Braun Inc. and merged it with Brown & Root, forming Halliburton KBR. In 2007, Halliburton announced its separation from KBR, which had become the company’s primary contracting, engineering, and construction unit. KBR bought BE&K in 2008, a construction and engineering company based in Alabama. Since then, the company has separated into three major businesses, including government services as well as technology and consulting. Today, KBR Inc. still receives most of its revenue from its government services segment.

KBR Inc. has a diverse customer base

KBR Inc. primarily provides services and products to the hydrocarbon and government services industries, and it generates revenue in countries all over the world. Their technology and consulting services provide proprietary technology specializing in areas such as refining, ammonia, fertilizers, largely through their subsidiaries. One of their subsidiaries, Granherne, is an oil and gas consultancy that is involved in the life cycle of hydrocarbon assets. In 2018, KBR Inc. acquired Stinger Ghaffarian Technologies to expand its aerospace sector operations. KBR supports NASA and several departments of the federal government, as well as the European Space Agency, and some leading commercial space organizations through scientific research and training simulations, as well as extreme environmental testing for equipment used in space.

In spite of a downward trend experienced since 2009, KBR’s revenue has been constantly growing since it reached its lowest level in 2017. To put it in another way, KBR’s global revenue was just under 4.2 billion U.S. dollars in 2017, four years later, this figure was over seven billion euros. Nevertheless, this revenue level is still much lower than in 2009. Additionally, KBR has also significantly decreased its global assets after 2009. For instance, the value of KBR Inc.'s properties, plants and equipment in the U.S., its home country, drastically decreased from 115 million U.S. dollars in 2014 to 50 million five years later. All the same, this company seems to have neglected a global expansion in favor of an increased focus on the North American market. The revenue generated by this company still had a diversified source back in 2011, with figures close to one billion U.S. dollars stemming from different world regions. In 2021, the generation of revenue was mostly concentrated in the United States.
This text provides general information. Statista assumes no liability for the information given being complete or correct. Due to varying update cycles, statistics can display more up-to-date data than referenced in the text.
Published by Statista Research Department, Sep 12, 2022 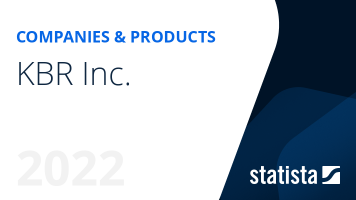 The most important key figures provide you with a compact summary of the topic of "KBR Inc." and take you straight to the corresponding statistics.