Infrastructure in the U.S. - statistics & facts

Published by Statista Research Department, Feb 2, 2022
Infrastructure is necessary for a functioning economy. There are many aspects of infrastructure, but each has the goal of providing an environment in which both businesses and people in a country can thrive. The United States ranks quite high in quality of infrastructure.
The easiest example is transport infrastructure, which includes roads, railroads, airports, and seaports. The status of the country’s roads varies from state to state, with some areas having many structurally deficient road bridges. Projected expenditure on public transport is projected to remain high, indicating that some of these issues should be addressed in the near future.

Energy is another key infrastructure sector. Energy producers use a variety of energy sources in the United States, most based on fossil fuels. Operation and maintenance costs vary by type of plant and location, but they give an idea of the cost of supplying energy infrastructure in a country where electricity consumption is in the billions of kilowatt hours.

Water is another important component of infrastructure, including the treatment of wastewater. As a share of gross domestic product (GDP), public spending on water resources and utilities approaches the amount of spending on highways. Waste water is another important aspect of infrastructure which is often overlooked. Like trash collection, a good sewage system goes unnoticed until it breaks down.

In the following 5 chapters, you will quickly find the 27 most important statistics relating to "U.S. Infrastructure".

The most important key figures provide you with a compact summary of the topic of "U.S. Infrastructure" and take you straight to the corresponding statistics.

Construction equipment industry in the U.S.

Airports in the United States

Road accidents in the United States 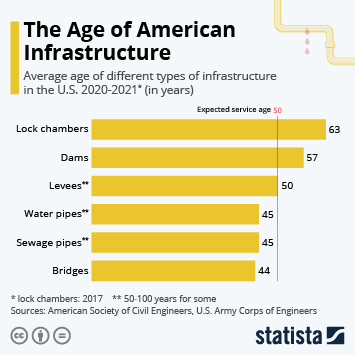