Published by
Federica Laricchia,
Sep 22, 2022
Audio and sound equipment refers to any electrical device used to play, reproduce or record sound, such as turntables, mixers, MP3 players, radios, microphones and speakers. The market sits generally within the consumer electronics industry, and can also include further product segments such as hi-fi products. Hi-fi stands for “High Fidelity”, a term used to refer to high-quality audio and sound devices that attempt to recreate the original sound as close to reality as possible.

True Wireless on the rise

Headphones and earphones are among the most common audio and sound equipment types worldwide. Over the years, vendors have shipped more and more headphones worldwide. The number of headphones shipped reached 549 million in 2020, a huge increase on the figures seen in 2013. True wireless stereo (TWS) headsets and wearable band shipments are expected to increase even further in the coming years, in part sparked by the proliferation of Apple’s AirPods. As well as new TWS offerings from competing manufacturers such as Sony and Bose, more affordable options are now available from companies including Xiaomi and Jabra.

Smart speakers – a speaker with an integrated voice activated assistant - have increased in popularity in recent years, and seen a corresponding growth in revenue. Amazon shipped more units than any other vendor in 2021, followed by Google. These two giants were expected to have shipped a combined 74.5 million units by the end of 2021, ahead of the five million sold by nearest rival Apple .

US: A profitable audio and sound market

The U.S. is a profitable market for the audio and sound equipment industry, as the market value of consumer electronics in the U.S. was expected to pass the 164 billion U.S. dollars mark for the first time in 2020. Microphones and speaker enclosures are the most popular sound devices amongst American consumers. In 2020, microphones accounted for sales equalling 650million U.S. dollars sound gear retail sales in the U.S. This is likely due not just to demand from professional users, but from the rise in people recording audio in the home for YouTube, podcasts, and keeping in touch during lockdown conditions.

In the following 5 chapters, you will quickly find the 29 most important statistics relating to "Audio & sound equipment". 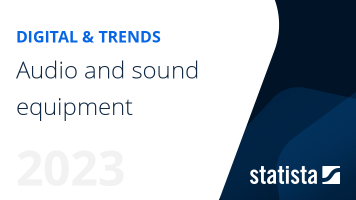 The most important key figures provide you with a compact summary of the topic of "Audio & sound equipment" and take you straight to the corresponding statistics.

Digital Music in the United States 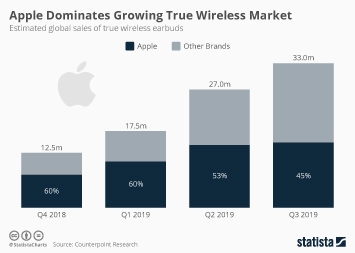 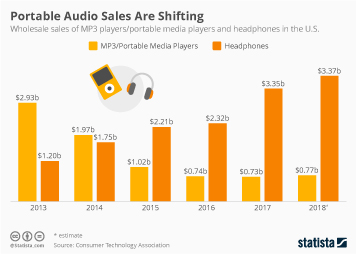