Amazon Prime Music, Apple Music, Spotify, Deezer, iHeartRadio, Pandora, SoundCloud and Tidal are a few examples of streaming services offered in the United States. Spotify is particularly popular amongst young listeners, as 38 percent of listeners aged 12 to 24 used this service in 2017. Moreover, 41 percent of Americans' time spent listening to music was via streaming in 2017.

Amongst the most popular music genres, dance/electronic music, R&B/hip-hop and Latin music were more likely to be consumed on streaming services rather than on physical albums. On-demand streaming accounted for 69 percent of all R&B/hip-hop music consumption in the U.S. in 2017, and 71 percent of Latin music was consumed via streaming. Mobile devices were most popular for streaming or downloading music or radio, and some Americans listening to music via a Smart TV or games console, demonstrating the move away from more traditional listening habits. Indeed, 68 percent of Americans who took part in a survey in early 2018 stated that the most important feature of music streaming services was the ability to listen on multiple devices.

Overall, the music industry in the U.S. is flourishing, driven by consumers with a growing demand for flexible and paid streaming services and an appetite for on-the-go music consumption. The digital music average revenue per user is estimated to amount to 50.47 dollars in 2022, up from just under 44 dollars in 2018, and with consumers moving away from physical formats and towards digital sources with increased velocity, it is digital music, not physical, which determines the future of the U.S. music market.

In the following 4 chapters, you will quickly find the 28 most important statistics relating to "Digital Music".

The most important key figures provide you with a compact summary of the topic of "Digital Music" and take you straight to the corresponding statistics. 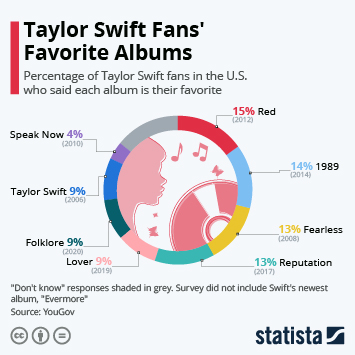 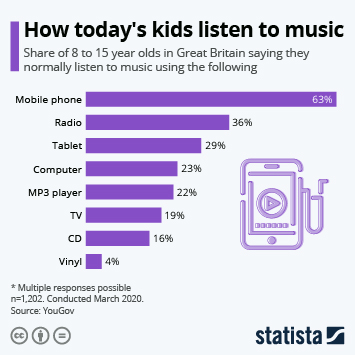 how kids listen to music gb