Jamaica is an island country located in the West Indies in the Caribbean Sea. It is one of the larger islands in the region, but still smaller than both Cuba and Hispaniola. Jamaica is well known internationally and has become a popular tourist destination; millions of people visit the island not only as overnight guests, but also as part of a cruise. In an average year, visitors to the island outnumber the residents by far, as the population amounts to only around 2.7 million people. Yet, although the island is relatively small in size and population, Jamaican culture and music reaches far and wide and has become well-known around the world; the Rastafari belief, for example, originated in Jamaica. Bob Marley, the most famous Rastafari, helped bring reggae music and Rastafarianism international attention.

Over half of Jamaica's population is living in urban areas and cities, with Kingston being the capital and largest city, located on the southeastern coast of the island. The island's fertility rate is slightly bellow the natural replacement rate and population growth is minimal. Many Jamaicans have migrated to the United States, Canada, and the United Kingdom, causing the low population growth rate to decrease further, and a many of them have brought their culture and music with them. Life expectancy at birth is slightly lower than average at around 74 years of age.

Overall, the country is politically stable, yet while resources are abundant, the economy has struggled throughout the country's history. However, the economic outlook for the island seems positive: the GDP growth rate is expected to increase above two percent annually in the near future, the inflation rate appears to be stabilizing somewhat and unemployment is decreasing considerably, as is the national debt in relation to GDP. Presently, the economy is largely based on services, generating around 60 percent of GDP; the majority of which is associated with tourism and accommodation on the island. A similar distribution can be found regarding employment within each sector. It is also apparent that the industrial sector is weak, as it only contributes around 20 percent to both GDP and employment. This has resulted in a negative trade balance due to a visible dependence on imports - the majority of which come from the United States, which is Jamaica’s largest trade partner for both imports as well as exports.
This text provides general information. Statista assumes no liability for the information given being complete or correct. Due to varying update cycles, statistics can display more up-to-date data than referenced in the text.

Trade balance of goods of Jamaica 2021

Youth unemployment rate in Jamaica in 2021

Jamaica and the coronavirus 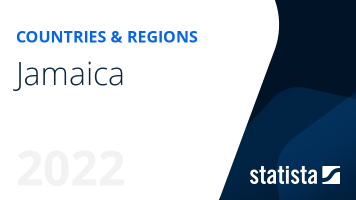 The most important key figures provide you with a compact summary of the topic of "Jamaica" and take you straight to the corresponding statistics.