Published by Jan Conway, Dec 17, 2021
Rum is an alcoholic beverage distilled through fermentation from the byproducts of sugarcane such as molasses, or directly from sugarcane juice. Rum is most commonly used as a mixer for cocktails but there is increasing attention on premium rums suitable for sipping straight. Most rums are produced in the Caribbean, as well as North and South America.

Retail sales of rum in the United States reached about eight billion U.S. dollars in 2020. The most revenue in that year was generated for suppliers of premium rum, the second lowest price tier. The value of rum imports in the U.S. has been steadily increasing, year after year. In 2020, the value of rum imports increased 5.5 percent to 145 million U.S. dollars. Three out the four top countries of origin for U.S. rum imports were in the Caribbean, with the leader, the Dominican Republic, accounting for almost double the value of the next biggest trade partner. Bacardi, a family owned company headquartered in Bermuda, produces rum of the same name which holds the largest share of the U.S. rum market.

The total sales volume of rum in the U.S. increased to 25.1 million 9 liter cases in 2020, representing an increase of four percent over the previous year. Per capita consumption meanwhile dipped slightly to 0.47 liters in the same year. Rum has a spike in consumption during the summer months, when consumers are drinking poolside cocktails, but December is the month with the overall highest consumption.

In the following 4 chapters, you will quickly find the 33 most important statistics relating to "Rum market in the United States". 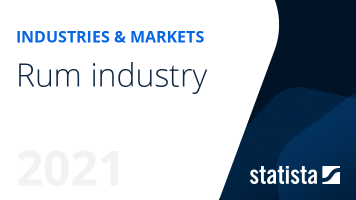 The most important key figures provide you with a compact summary of the topic of "Rum market in the United States" and take you straight to the corresponding statistics.