Dell’s role in the market

Founded in 1984, Dell has since been headquartered in Round Rock, Texas. Before 2013, Dell was a public company, with the bulk of its revenue made through personal computer (PC) sales. In 2013, after falling to a market share of just 10.4 percent of PCs worldwide, founder and CEO Michael Dell bought out Dell for 24.4 billion U.S. dollars and made it private for a period of directional shift. In 2016, Dell Technologies was formed after the merger of Dell and EMC Corporation (now Dell EMC), a cash-and-stock deal valued at 67 billion U.S. dollars, with Dell Technologies becoming a public company again.

Dell Technologies operates across two business units: Infrastructure Solutions Group (ISG) and Client Solutions Group (CSG). The CSG includes branded hardware such as desktops and notebooks, as well as peripherals including monitors and projectors. The ISG, or Dell EMC, incorporates the company’s various activities in the storage, server, converged systems, and cloud solutions market and has utilized the expertise EMC has had across these fields.

Dell Technologies is now focusing on managing business clients’ data needs, reflecting the changing market environment from traditional, hardware-based enterprise storage to hybrid cloud services. For Dell Technologies to better compete in the area of cloud computing and to be able to handle multi-cloud operations, the company obtained VMware during the EMC acquisition. VMware is a cloud computing and software virtualization company, working in the areas of hybrid and multi-cloud, networking, and security.
This text provides general information. Statista assumes no liability for the information given being complete or correct. Due to varying update cycles, statistics can display more up-to-date data than referenced in the text.

Thomas Alsop
Research expert covering the global hardware industry
Get in touch with us now
Published by Thomas Alsop, Mar 30, 2022 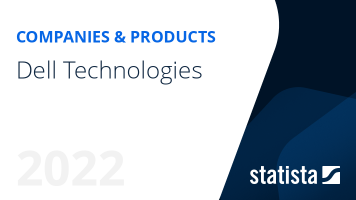 The most important key figures provide you with a compact summary of the topic of "Dell Technologies" and take you straight to the corresponding statistics.