Published by
Aaron O'Neill,
Dec 10, 2021
Latin America comprises around 20 countries, which can be subdivided into four regions based on their geographical position: North America, Central America, the Caribbean and South America. As of 2021, Latin America accounts for about 8.37 percent of the global population, and is home to 656 million inhabitants - less than Europe, by the way, despite its larger geographical area spanning from Mexico to Cape Horn. The predominant languages spoken in Latin American countries are Spanish and Portuguese.

In 2021, people living in Latin America had a quite high average life expectancy at birth, one of the highest life expectancies at birth in the world. However, substantial differences in the population figures can be observed across the countries. They are a direct result of variations in fertility levels and health care provisions. Recently, Latin America was among the major areas of the world where a high adolescence birth rate was observed. A few years ago, one of the major health risks Latin American countries are facing was an infection with the Zika virus, which can pose serious health problems for mothers and their new-borns. Today, the coronavirus poses a new health risk in the region.

Additionally, Latin America is one of the regions with the highest crime rates worldwide. Out of the world's 50 most violent cities, 44 are in Latin America alone – the highest murder rate being found in Los Cabos, Mexico with about 111 homicides per 100,000 residents as of 2020. The violence and the nature of these crimes can be mainly attributed to drug trafficking, gang warfare and political instability.

In the following 23 chapters, you will quickly find the 146 most important statistics relating to "Latin America".

The most important key figures provide you with a compact summary of the topic of "Latin America" and take you straight to the corresponding statistics. 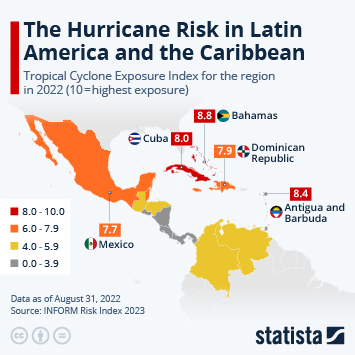 The Hurricane Risk in Latin America and the Caribbean 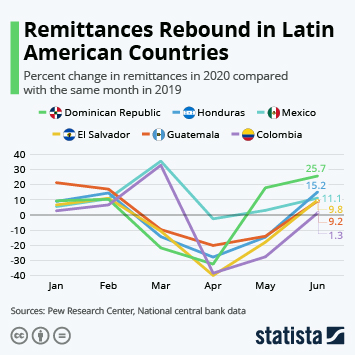