Starting a company is not an easy task, nevertheless the world has been witnessing a growing number of startups being created. In Latin America and the Caribbean, the working-age population involved in setting up a new business can range from eight percent in Brazil to over 25 percent in Ecuador. Brazil, for instance, is one of the Latin American countries with the highest entrepreneurship rate among businesses up to 3.5 years old. This means that startups are not only founded, they also prosper there. The region also stands out for having the highest female entrepreneurship rates in the world, most notably Ecuador, where over one third of working-age women are involved in early-stage business activities.

Can startups thrive in Latin America?

Starting a new company is one of the areas with the highest score when analyzing the ease of doing business in Latin America. Getting credit or enforcing contracts may not be so easy for entrepreneurs, on the other hand. However, the number of unicorn companies that the region has produced in recent years is proof to the fact that the Latin American startup ecosystem is thriving, and not only within national borders. The most successful startup company in the region is the Brazilian challenger bank Nubank, valued at ten billion U.S. dollars. Only one other can rival such enormous capital – at least when it comes to attracting investments – and that startup is Colombian on-demand delivery platform, Rappi.

Large metropolises are the ideal hubs for startup incubation and acceleration. In Latin America, many of these coincide with the countries' capitals, such as Mexico City, which holds over 30 percent of all startups in operation in the Mexican territory. This is also the case in Colombia where more than half of all startups are based in Bogotá and its immediate neighborhood. In Brazil, nonetheless, the megalopolis formed by São Paulo and Rio de Janeiro, neither of them capital cities, account for 25 percent of all Brazilian startups.
This text provides general information. Statista assumes no liability for the information given being complete or correct. Due to varying update cycles, statistics can display more up-to-date data than referenced in the text.

Industry that produces most unicorns in Latin America
Finance and insurance

Share of unicorns in Latin America in 2021, by industry 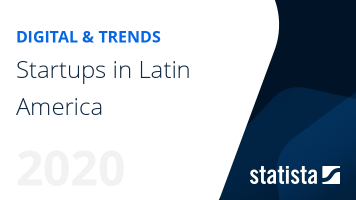 The most important key figures provide you with a compact summary of the topic of "Startups in Latin America" and take you straight to the corresponding statistics.