Published by Statista Research Department, Nov 23, 2021
There are various forms of legal gambling in the United Kingdom. These can include casinos, betting, lotteries, bingo, scratchcards, online (or remote) gambling, and more. The industry is regulated by the Gambling Commission which represents the government’s Department for Digital, Culture, Media, and Sport (DCMS). In 2020, the gross gambling yield (GGY) in Great Britain was 5.89 billion British pounds, down from the previous year's GGY of 14.12 billion pounds. This drop can be attributed to the coronavirus (COVID-19) pandemic which drastically impacted the gambling industry due to the closure of brick-and-mortar establishments and the pausing of major sports leagues. Prior to the pandemic, in 2019, the number of employees in the gambling industry in Great Britain exceeded 85 thousand. The majority of these employees worked in the betting sector, followed by the casino and bingo sectors, respectively. The number of employees per gambling establishment in Great Britain was usually fewer than 10.

Which Brits gamble the most?

The older generations participated more in gambling in 2020. The age of gambling participants in Great Britain ranged between 16 and 65+, with those between the ages of 45 and 54 reporting the highest gambling participation. Wealthier Brits were also more likely to gamble during that year. According to a survey, the average weekly household spending on gambling was highest amongst households belonging to the ninth decile group, the second highest group in terms of household income. On average, households belonging to this decile group spent 2.9 British pounds weekly on gambling. Another study examined the frequency of gambling in Great Britain and found that 32 percent of the British public gambled once a week. Meanwhile, 30.8 percent of the public stated that they participated in gambling once a month.

What is the future of gambling in the UK?

Due in part to the coronavirus pandemic, the share of the public who gambled online in Great Britain increased in 2021. Approximately 28.8 percent of adults between the ages of 45 to 54 stated that they took part in some form of online gambling four weeks prior to being surveyed, by 2021 this figure had grown to 32.8 percent. While the older generations are participating more in gambling, the amount of underage gambling among youths in Great Britain declined in recent years. Meanwhile, in 2021, the share of problem gamblers in Great Britain was highest among those aged 35 to 44 years old. When it came to the public perception of gambling, the share of the British public that agreed that gambling was conducted fairly and can be trusted reached its lowest point in 2020.

In the following 7 chapters, you will quickly find the 32 most important statistics relating to "Gambling industry in the United Kingdom (UK)". 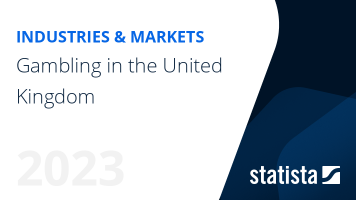 The most important key figures provide you with a compact summary of the topic of "Gambling industry in the United Kingdom (UK)" and take you straight to the corresponding statistics.

Gambling in the U.S.