The Co-operative Group - Statistics and Facts

The group's food retailing business, which operates as Co-op Food, has almost 2,600 stores across the country and is the seventh largest retailer in the United Kingdom. These shops range from convenience stores to some larger superstores, although the majority are convenience to medium-sized supermarkets. The Co-operative is well-known for its ethical trading and campaigning, which ranges from issues such as animal welfare and the use of pesticides to clean energy and a locally-sourced product range. As of 2017, the retailer became the first in the country to sell British-only fresh meat to counteract rising levels of imports and uncertainties following Brexit. It was also the first major retailer to stock Fairtrade products and publishes an annual report on sustainability issues, including figures on the volume of produced food waste and the share that is recycled or reused.
This text provides general information. Statista assumes no liability for the information given being complete or correct. Due to varying update cycles, statistics can display more up-to-date data than referenced in the text.
Published by Emma Bedford, May 3, 2022 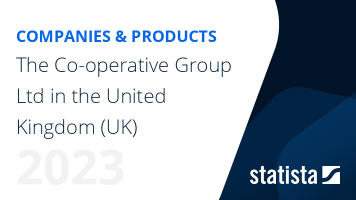 The most important key figures provide you with a compact summary of the topic of "The Co-operative Group" and take you straight to the corresponding statistics.