The United Kingdom’s grocery landscape has traditionally been dominated by the ‘big four’ supermarket chains: Tesco, Asda, Sainsbury’s, and Morrisons. However, there are signs that the landscape is adjusting to the current economic climate. In September 2022, the German discounter Aldi overtook Morrisons for the first time to be the supermarket with the fourth largest market share in the UK.
Together, the current big four represent almost two-thirds of the total grocery retail market. In 2022, the market was estimated to have a value of almost 217 billion British pounds, with supermarkets as the dominant store format. While supermarkets are expected to remain as the leading channel, the online market is projected to become increasingly relevant.

Food store sales in the United Kingdom follow a fairly consistent pattern over the course of a year. Typically, sales in food stores and supermarkets peak during the Christmas trading period, see notable increases around Easter, and subside during the summer months. The pandemic also had a notable impact on the pattern of supermarket sales. Looking at Great Britain's leading supermarket chain Tesco, sales improved on a year-on-year basis by between 7.2 to around 15 percent in the months that followed the start of the pandemic. The same was true for other 'big four' chains, such as Asda, or discount supermarkets, such as Lidl.

In 2022, Statista's Global Consumer Survey found that 88 percent of UK consumers regularly shopped for food and everyday products from supermarkets. Another study revealed that one-third of consumers visited supermarkets 2-3 times a week for their food shopping. For more than half of UK consumers, Tesco was the primary supermarket destination. Tesco's popularity with UK consumers was not limited to in-store shopping. Around 39 percent of UK consumers said they ordered groceries from Tesco's online store. In addition to the online stores of traditional supermarket chains, UK consumers chose online grocery stores like Ocado or grocery delivery companies such as Amazon Fresh and Beelivery for their grocery orders.
This text provides general information. Statista assumes no liability for the information given being complete or correct. Due to varying update cycles, statistics can display more up-to-date data than referenced in the text.
Published by Emma Bedford, Oct 21, 2022

Percentage change in value of sales in predominantly food stores
1.5%

Average cost of a shopping basket in the United Kingdom (UK) 2022, by supermarket 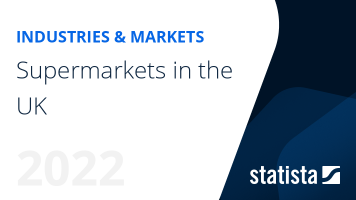 Go to report Supermarkets in the UK
Top Seller

The most important key figures provide you with a compact summary of the topic of "Supermarkets in the United Kingdom (UK)" and take you straight to the corresponding statistics.