Published by D. Clark, Sep 22, 2021
With a population of approximately nine million people, London is by far the largest city in the United Kingdom, with the UK's second and third largest cities, having a combined population of just 5.34 million by comparison. While London's population accounts for less than a tenth of the total UK population, it contributes a quarter of the UK's gross domestic product (GDP) at around 504 billion British pounds. Apart from being demographically and economically dominant, London is also the political center of the United Kingdom, with executive and legislative power flowing from 10 Downing Street and Westminster respectively. London is also home to the Royal Family, whose cultural power acts as a major tourism magnet for the UK capital.

Due to these and several other factors, London is a very popular city to live and work in, reflected in rising house prices, and a booming office real estate market. Although densely populated by workers and tourists, the inner boroughs of London are not as heavily populated as it's outer ones, with boroughs such as Barnet, Croydon, and Newham being the largest in terms of population in 2019. The existence of an extensive and well maintained transport system, enables many of London's workers to live even further afield, especially in the many commuter towns that orbit the capital.

Challenges for the future

Despite all of the undoubted strengths of London as a major global center, the city itself, as well as it's relationship with the rest of the country faces challenges. In recent years, there has been a steady rise in crime in London. Alongside this, the number of homeless people in London has increased dramatically in the last ten years. Despite having it's own internal problems with economic poverty, there is also the general feeling of London being cut-off and insulated from the concerns of the rest of the country. This was perhaps best expressed in the Brexit vote of 2016, which saw London being the only region of England to vote remain instead of leave.

In the following 5 chapters, you will quickly find the 34 most important statistics relating to "London".

The most important key figures provide you with a compact summary of the topic of "London" and take you straight to the corresponding statistics. 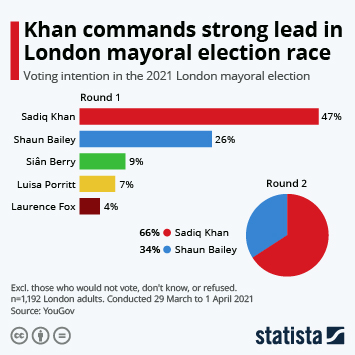 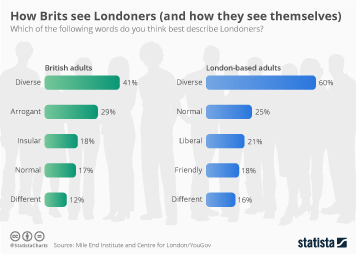 How Brits see Londoners and how they see themselves