Published by
M. Shahbandeh,
Feb 8, 2022
The term “organic” broadly applies to a method of crop and livestock production that involves abstaining from the use of pesticides, fertilizers, genetically modified organisms, antibiotics and growth hormones. Organic farming, which arose after the industrialization of agriculture in the 1900s, aims at protecting the environment, preserving the soil nutrients and maintaining biological diversity within the system. In addition, it promotes the use of crop rotation and cover crops and stimulates a balanced host-predator relationship.

Europe held 16.5 million hectares of organic agricultural land as of 2019. Among the leading countries in the organic farming industry, Spain and Italy stand out in terms of organic agricultural land. Turkey and Italy are countries with the most organic producers. A further specification worth mentioning is the use of farmland. It is possible to distinguish between arable and permanent crops, permanent grassland, and other uses.

The number of organic producers in the European Union countries amounted to about 344 thousand in 2019. Similarly, the number of organic processors in the EU has increased in the past several years peaking at 78 thousand in the year 2019.
Organic agricultural production includes several different products depending on the geographical area of the country and the environmental background. For instance, in Italy, there is a large amount of land used for organic cereal farming. Denmark, on the other hand, produces more organic dairy products, producing 23 million kilograms of organic eggs in 2020.

The boom in the organic agriculture industry is accompanied by a positive growing trend in the organic food market in Europe. In fact, the organic retail sales value in 2019 amounted to 45 billion euros, four times the value from 15 years prior. Demand for organic foods is also on the rise, primarily driven by personal health choices and the adoption of certain diets. The per capita consumption of organic food is highest in Switzerland at around 338 euros, followed by Denmark and Sweden.

In the following 4 chapters, you will quickly find the 21 most important statistics relating to "Organic farming in Europe". 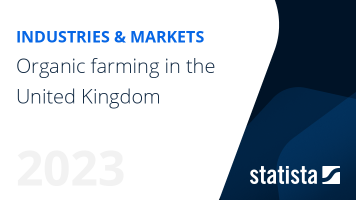 The most important key figures provide you with a compact summary of the topic of "Organic farming in Europe" and take you straight to the corresponding statistics. 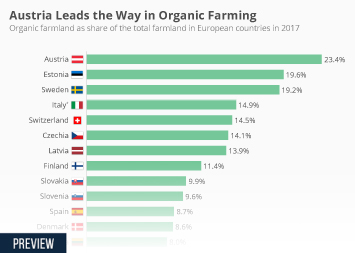