Published by Statista Research Department, Nov 22, 2022
A large share of the European population owns pets and considers them as their best friends and beloved members of the family. The number of households owning at least one pet animal has increased and consumers are spending more and more on their pets, thus boosting the turnover of the pet food products industry. Europe and North America were the leading regions in the production of pet food globally, with each producing around 9.4 million metric tons of pet food in 2020. Germany and the United Kingdom both accounted for a 4.9 percent share of the global pet product market in 2020.

The vast majority of European households are especially attached to cats and dogs. One of the immediate consequences of such a trend is the marked increase over the years in the value of imported cat and dog food in the EU, from merely 480 million U.S. dollars in 2011 to more than 1.5 billion U.S. dollars by 2020.
As of 2020, an estimated one million people were employed directly or indirectly in the pet food industry in Europe.

In the following 4 chapters, you will quickly find the 26 most important statistics relating to "Pet market in Europe". 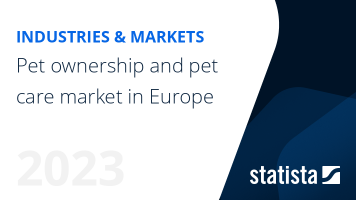 The most important key figures provide you with a compact summary of the topic of "Pet market in Europe" and take you straight to the corresponding statistics.

Pet ownership in the United States 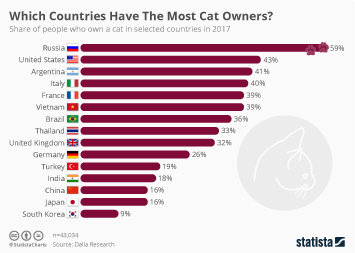 Which Countries Have The Most Cat Owners