Nursing homes are a type of long-term care facility for people who do not need to stay in a hospital, but, for medical reasons, cannot live on their own. Most nursing home residents are elderly, but younger adults with mental or physical disabilities may also stay at such facilities. In the United States, the majority of nursing homes are certified by both Medicare and Medicaid, while a decreasing number are certified by only one or the other. In 2019, there were over 15 thousand nursing homes in the United States, almost two-thirds of which were for profit. During that year, there were 105 nursing home beds per 1,000 people in the United States. As of 2021, Henry J Carter was the skilled nursing facility chain with the highest number of certified beds. Nursing care facilities employed over 1.6 million people in 2019.
In 2019, the state of Texas had the highest number of nursing homes of any U.S. state with 1,214 facilities, followed by California and Ohio with 1,187 and 952 homes respectively. In that year, Alaska had the fewest nursing homes, but had, by far, the highest annual cost for a private room in nursing homes in 2020. A private room in a nursing home in Alaska costs 436,540 U.S. dollars per year on average, while a private room in Connecticut, the second most expensive state, costs 167,900 dollars per year.

Distribution of nursing homes in the U.S. 2003-2022, by certification type

U.S. number of residents in certified nursing facilities as of 2022, by state 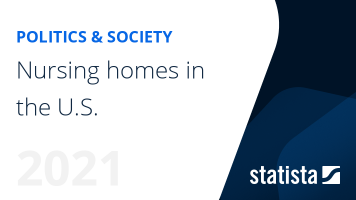 Go to report Nursing homes in the U.S.
Top Seller

The most important key figures provide you with a compact summary of the topic of "Nursing homes in the U.S." and take you straight to the corresponding statistics.