Cider is an alcoholic beverage obtained from fermenting the juice of apples. The addition of sugar and other fruits can increase the alcoholic content. Europeans are on average the highest consumers of cider compared to the rest of the world. Sale volumes of cider have reached over 600 million liters a year in the United Kingdom, while domestic sales in Finland amounted to approximately 29 million liters in 2016. In the Netherlands, the sales value of cider reached roughly 8.8 million euros in 2017.
Of countries in Europe, cider is particularly popular in the United Kingdom. There the per capita consumption of cider amounted to 11.7 liters in 2015, or 20.6 pints per head. Cider is widely consumed in pubs and bars, as well as being available for purchase in off licenses and grocery stores.

Given the considerable amount spent annually on cider in the United Kingdom, the alcoholic beverage is subjected to severe taxation. As of 2012, a total tax of 68 pence sterling was applied per liter bottle or pint of cider in retail outlets all over the United Kingdom. Hence, the central government forecasted a duties income stemming from sales of beer and cider of 4.1 billion British pounds between the financial years 2021 and 2022. 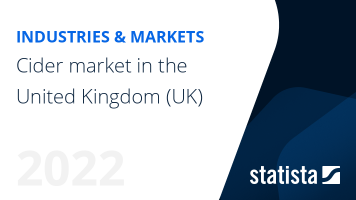 The most important key figures provide you with a compact summary of the topic of "Cider market in Europe" and take you straight to the corresponding statistics.

Cider industry in the U.S.