Cider is an alcoholic beverage made from apples. Alcoholic percentages can range from 1.2 to 8.5 percent. In the United States, the beverage is known as hard cider.
Cider is enjoyed in many countries around the world, however primarily in Europe. Global sales in 2016 amounted to over tenb illion U.S. dollars and are projected to increase dramatically to over 16 billion in 2023, based on the fact that global sales have steadily increased on a year-by-year basis. Five producers accounted for more than 50 percent of the global cider market share.

In Chicago, the sales volume of cider rose by approximately 8.5 percent in 2017, compared to the prior year. In terms of dollar sales, the value increased from 378 million U.S. dollars in 2014 to 436.16 million U.S. dollars in 2015. As of January 2018, the majority of cider producers in the United States was located in New York State, having a total of 93. Michigan and California rounded off the leading state regarding the number of cider producers.

In 2020, the most popular cider brand - based on sales in retail stores - was Angry Orchard, significantly outselling the competition with around 222 million U.S. dollars of sales. Angry Orchard, which is owned by the Boston Beer Company, sold more cider in 2020 than the other four most popular U.S. cider brands combined.
This text provides general information. Statista assumes no liability for the information given being complete or correct. Due to varying update cycles, statistics can display more up-to-date data than referenced in the text.
Published by Statista Research Department, Nov 23, 2021

Leading cider brand in the U.S., based on retail sales
Angry Orchard 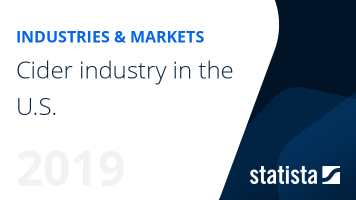 Go to report Cider industry in the U.S.
Top Seller

The most important key figures provide you with a compact summary of the topic of "Cider industry" and take you straight to the corresponding statistics.