Published by
José Gabriel Navarro,
Nov 30, 2021
The landscape in Hollywood is always changing – so it can remain more or less the same. The top film studios in the United States faced unprecedented challenges in 2020. The spread of COVID-19 across the globe led many consumers to stay home, accelerating the video streaming trend and leaving the rambunctious premieres at movie theaters behind. The number of feature films released in the U.S. and Canada declined by almost 60 percent between 2019 and 2020. But, after the annus horribilis, the industry seems to be catching up. As of September 2021, the so-called "Big Five" – Disney, Paramount, Sony, Universal, and Warner Bros. – held about 81 percent of the movie market in the U.S. and Canada. In 2020, the combined share of the five largest film studios stood below 75 percent. It was the first time that happened since 2005.

The process of acquisition of 21st Century Fox by Disney ended in March 2019, one year before the coronavirus outbreak escalated. Throughout most of the second half of the 2020s, Disney’s performance at theaters in the U.S. and Canada was on a roll. The company grossed record 3.8 billion U.S. dollars at the box offices in 2019. Meanwhile, the box office revenue of 20th Century Fox – now also run by Disney – trended down as the decade ended. During the entire 21st century, Fox only once grossed over 1.5 billion dollars at American and Canadian box offices. It was in 2014, a year of blockbusters like "X-Men: Days of Future Past" and "Dawn of the Planet of the Apes". Disney, however, is yet to re-activate this asset in a post-COVID-19 scenario. When the acquisition was concluded, the corporation held about one third of the film studio market share in the U.S. and Canada. In 2020, for the first time in five years, its share stood below 20 percent.

Sony at the top

Of the “Big Five”, Sony Pictures had the best results in the U.S. and Canada. In that North American market, the company – which owns brands such as Columbia and Tristar – accounted for 22.2 percent of sales at the box offices in 2020, the highest share of its history. Given the extraordinary circumstances, the year might not be representative of the full potential of major studios. But Sony Pictures is part of a multibillion-dollar conglomerate. While the box office revenue of Sony in the U.S. and Canada plummeted by over 60 percent between 2019 and 2020, the revenue generated by the whole Pictures division of the Sony Group Corporation worldwide decreased by 23 percent between the fiscal years of 2019/20 and 2020/21. In the latter period, it added up to over seven billion dollars. Sony has the resources to take the studio to new heights. For instance, its video streaming enterprise, Crackle, never succeeded – Sony sold its remaining stake in the platform at the end of 2020.

In the following 8 chapters, you will quickly find the 37 most important statistics relating to "Film studios".

The most important key figures provide you with a compact summary of the topic of "Film studios" and take you straight to the corresponding statistics.

Box office in the U.S. 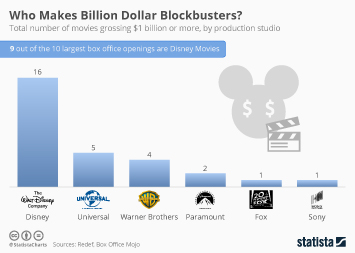