The Dallas Mavericks are a professional basketball team that compete in the National Basketball Association’s Western Conference Southwest Division. The Mavericks were co-founded by Don Carter and Norm Sonju in 1980 for an expansion fee of 12.5 million dollars. The team has since grown to a franchise value of 2.4 billion U.S. dollars and is currently owned by American businessman and investor, Mark Cuban.
The Mavericks play their home games at the American Airlines Center in Dallas and currently hold the longest running sellout streak among major sport teams in North America. During the 2019/20 NBA season, the average regular season home attendance for a Mavericks game was 20,061 per game, and total attendance for that season amounted to 682,096. The Mavericks generated around 307 million U.S. dollars in revenue during the 2018/19 season, and the team’s operating income for that year amounted to 105 million U.S. dollars. The team is the ninth most valuable NBA franchise as of 2020.

Led by Germany’s Dirk Nowitzki, the Mavericks’ only NBA title was won at the 2011 NBA finals against the San Antonio Spurs. The team has a strong presence on social media, with a combined total of around 6.1 million fans and followers on Facebook and Twitter.
This text provides general information. Statista assumes no liability for the information given being complete or correct. Due to varying update cycles, statistics can display more up-to-date data than referenced in the text.

Christina Gough
Research expert covering sports and video gaming
Get in touch with us now
Published by Christina Gough, Jun 25, 2021 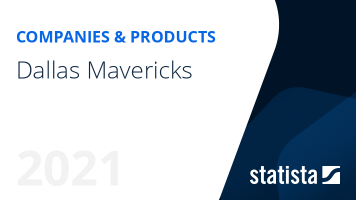 The most important key figures provide you with a compact summary of the topic of "Dallas Mavericks" and take you straight to the corresponding statistics.