NBA team revenues into the millions

Today, the NBA as a whole generates around six to eight billion U.S. dollars in revenue per season, a figure that has experienced a dip in the last two years as a result of the coronavirus (COVID-19) pandemic. In the 2020/21 season, the average revenue per franchise was around 213.5 million U.S. dollars. In that year, the Los Angeles Lakers and the New York Knicks topped the league in terms of annual revenue. At the other end of the sale, the Indian Pacers generated the lowest revenue in the league - 179 million U.S. dollars.

The league's most valuable franchises

The WNBA is the premier league for women's basketball in the United States, comprising 12 teams split into Eastern and Western conferences. The honor of highest paid player in the league in 2022 was shared among three players, two of whom played for Seattle Storm. Another of the players near the top of this list was Skylar Diggins-Smith, who has twice won the Nancy Lieberman Award for the best point guard in the country, and took home 227,900 U.S. dollars for her season's work in 2022.

In the following 7 chapters, you will quickly find the 41 most important statistics relating to "National Basketball Association (NBA)".

The most important key figures provide you with a compact summary of the topic of "National Basketball Association (NBA)" and take you straight to the corresponding statistics. 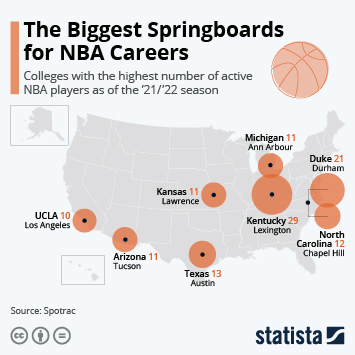 The Biggest Springboards for NBA Careers 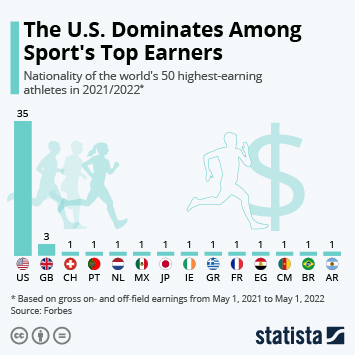