The Los Angeles Lakers are a professional basketball team which competes in the National Basketball Association (NBA) in the league's Western Conference Pacific Division. The franchise was established in 1947 in Minneapolis, two years before the NBA was formed, and was initially called the Minneapolis Lakers. The team adopted its current name after it was relocated to Los Angeles, California prior to the 1960/61 season.
The Lakers play their home games at Staples Center, a multi-purpose sports arena located in Downtown Los Angeles. In 2021/22, the average regular season home attendance for a Lakers game stood at 18,649. The team is currently the fifth most valuable sports team brand in the world with a franchise value amounting to about over five billion U.S. dollars in 2022. In 2020/21 season, the Lakers generated around 316 million U.S. dollars in revenue. The team’s operating income for that season amounted to 115 million U.S. dollars. The Lakers are currently owned by Jeanie Buss, daughter of former owner Jerry Buss, who passed away in 2013.

The Lakers are winners of 17 NBA championships and the team is considered one of the most successful in NBA history. Some of its most notable players include Kareem Abdul-Jabaar, Earvin “Magic” Johnson, Shaquille O’Neal, and Kobe Bryant. The Lakers had a combined total of over 32 million Facebook and Twitter fans and followers.
This text provides general information. Statista assumes no liability for the information given being complete or correct. Due to varying update cycles, statistics can display more up-to-date data than referenced in the text.

Christina Gough
Research expert covering sports and video gaming
Get in touch with us now
Published by Christina Gough, Dec 8, 2022 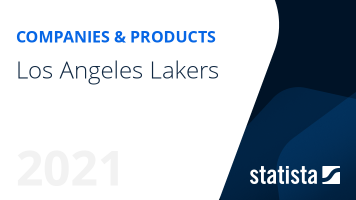 The most important key figures provide you with a compact summary of the topic of "Los Angeles Lakers" and take you straight to the corresponding statistics.