Published by
Christina Gough,
Jun 28, 2021
The Detroit Pistons are a professional basketball team that compete in the National Basketball Association’s Eastern Conference Central Division. The team was founded in Fort Wayne, Indiana in 1941 by factory owner Fred Zollner, whose foundry manufactured pistons for car trucks and locomotive engines. The team was initially called the Wayne Zollner Pistons when it was established and was changed to its current name after moving to Detroit in 1957.
The Pistons currently play their home games at Little Caesars Arena in Midtown Detroit. During the 2019/20 NBA season, the average regular season home attendance for a Pistons game was 15,438 per game and total attendance for that season amounted to 509,463. The Pistons generated around 227 million U.S. dollars revenue during the 2019/20 season and their operating income for that season was about 45 million U.S. dollars. The team’s franchise value stands at around 1.45 billion U.S. dollars and the franchise is currently owned by American businessman, Tom Gores.

The Pistons have won the NBA Finals on three occasions - in 1989, 1990, and 2004. Success in recent years, however, has been limited. The Pistons made the playoffs in the 2018-19 season, but were beaten in four games by the Milwaukee Bucks in the first round. The franchise has a combined total of around 2.96 million fans and followers on Facebook and Twitter.

In the following 4 chapters, you will quickly find the 33 most important statistics relating to "Detroit Pistons ". 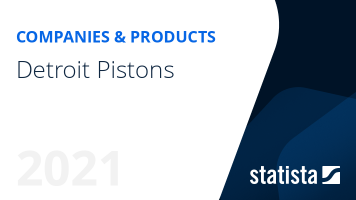 The most important key figures provide you with a compact summary of the topic of "Detroit Pistons " and take you straight to the corresponding statistics.