The Phoenix Suns are a professional basketball team that compete in the National Basketball Association’s Western Conference Pacific Division. The team was established by an ownership group led by American entrepreneur Karl Eller, who paid a two million U.S. dollar entry fee to join the NBA as an expansion team in 1968.
The Suns play their home games at Talking Stick Resort Arena in downtown Phoenix. During the 2019/20 NBA season, the average regular season home attendance for a Suns game was 15,732, while the season’s total attendance amounted to 550,633. The team generated 222 million U.S. dollars in revenue during the 2019/20 season and, in the same season, the Suns' operating income amounted to around 20 million U.S. dollars. The franchise value of the Phoenix team stands at approximately 1.7 billion U.S. dollars and it is currently owned by Robert Sarver, who acquired the team in 2004 for a purchase price of over 400 million U.S. dollars.

The Suns have never won an NBA title, although they have so far appeared in two NBA finals in 1976 and 1993. The Suns have a combined total of around three million fans and followers on Facebook and Twitter.
This text provides general information. Statista assumes no liability for the information given being complete or correct. Due to varying update cycles, statistics can display more up-to-date data than referenced in the text. 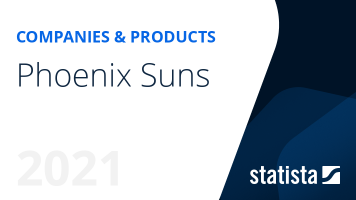 The most important key figures provide you with a compact summary of the topic of "Phoenix Suns " and take you straight to the corresponding statistics.