The Sacramento Kings are a professional basketball team that compete in the National Basketball Association’s Western Conference Pacific division. The team’s origins date back to 1923, when it was established in Rochester, New York as the Rochester Seagrams. The franchise joined the National Basketball League in 1945 as the Rochester Royals and was re-named the Cincinnati Royals upon its move to Cincinnati in 1957. Relocation to Kansas City, Missouri in 1972 necessitated another name change to the Kansas City Kings in 1975 and, in 1985, the team moved to its current location in Sacramento, California.
The Kings play their home games at the Golden 1 Center in downtown Sacramento. During the 2019/20 NBA season, the average regular season home attendance for a Sacramento Kings game was 16,795 and total attendance for that season amounted to 520,663. The team’s current franchise value stands at around 1.83 billion U.S. dollars, while its operating income amounted to approximately 45 million U.S. dollars in the 2019/20 regular season. In the same season, the Kings franchise generated revenue of around 245 million U.S. dollars. The team is currently chaired and co-owned by Indian-American businessman, Vivek Ranadivé, who had previously co-owned and been vice chairman of the Golden State Warriors.

The Kings have won only one league championship since their inception - their only NBA championship success came in 1951, when they were known as the Rochester Royals. They enjoyed more recent success in the form of divisional titles in 2002 and 2003. The franchise's Facebook and Twitter pages have a combined total of over nine million fans and followers.
This text provides general information. Statista assumes no liability for the information given being complete or correct. Due to varying update cycles, statistics can display more up-to-date data than referenced in the text. 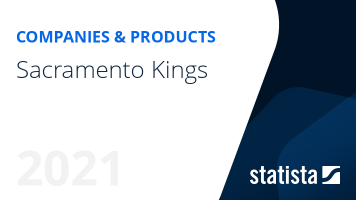 The most important key figures provide you with a compact summary of the topic of "Sacramento Kings " and take you straight to the corresponding statistics.