Published by Statista Research Department, Jul 19, 2021
With the average house in the United Kingdom (UK) costing over 256,000 British pounds as of March 2021, it is probably no surprise that the average age of a first time buyer in the UK was 31 years old. In certain regions, such as Greater London and South East, buying your first home can be especially challenging because of the substantially higher average house prices. So how has the number of first time buyers developed in recent years? Since the Great Recession, the number of people who bought their first home in the UK increased but the growth rate slowed down in recent years. In 2020, largely due to the coronavirus (COVID-19) crisis, the number of first time buyers fell below 2016 levels.
One of the key factors making it so important for people in the UK to get onto the property ladder is the fact that the monthly costs of buying are lower across the board than renting. In different regions of the country, the average monthly savings resulting from buying over renting were between 30 and 400 British pounds.

The problem for many is the overwhelming size of deposits and mortgages that have to be taken out. The average deposit needed by first-time buyers in 2020 in Greater London came to a whopping 130,000 British pounds and the average mortgage amounted to over 359,000 British pounds.

In April 2021, the UK government expanded the existing 'Help to Buy' initiative that launched in 2013 and added a regional property price limits. This meant that potential home buyers could take an equity loan from the government of up to 40 percent of the cost of the home in London and 20 percent in all other regions. New home owners would not have to start repaying the loan for the first five years. The Help to Buy loan meant that first time buyers would only potentially have to save a minimum of five percent of the deposit but would still need to have financed the rest of the home through a bank or building society. In December 2020 alone, the government paid out roughly 16 million British pounds in loans through the Help to Buy scheme. During the period between December 2015 and December 2020, there were close to 390,000 property completions and 510,000 bonuses through the same scheme.

In the following 4 chapters, you will quickly find the 26 most important statistics relating to "First-time home buying UK".

The most important key figures provide you with a compact summary of the topic of "First-time home buying UK" and take you straight to the corresponding statistics.

Mortgage industry in the U.S.

Assets and wealth of households in Europe 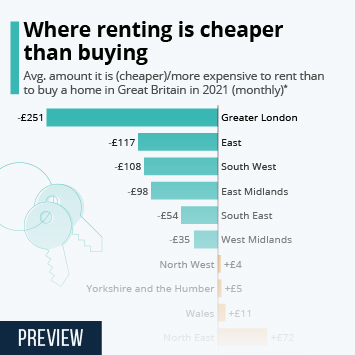