In 2021, 22.2 billion pairs of footwear were produced around the world. In comparison, global footwear production amounted to 24.3 billion pairs in 2019. Asia is responsible for over slightly less than 90 percent of global footwear production. This footwear is then exported all around the world, with Germany, Japan and France being among the largest footwear importers worldwide. The United States, however, stands out as the largest importer by a significant margin, importing roughly 2.4 billion pairs of shoes in 2021. In comparison, second-placed Germany imported about 631 million pairs of shoes.
One trend in the worldwide footwear market is the increased popularity of athletic footwear, which is not just worn for playing sport, but also as part of everyday fashion. The sports shoes market has been growing rapidly in the last decade and is expected to be worth about 77 billion U.S. dollars worldwide by 2025. Again, the United States was the country with the highest revenues from athletic footwear in 2021, followed by China.

There are a number of large multi-national companies within the global footwear industry, with sportswear brands well represented, one of the most well known being Nike. In 2021, Nike led its main direct competitors of Adidas and Puma with footwear segment revenues of approximately 28 billion U.S. dollars worldwide. In 2021/22, TJX Cos was the leading apparel and footwear retailing company in the world with revenues of 48.6 billion U.S. dollars. In regards to specialist footwear companies, Skechers posted the largest revenue worldwide at 5.9 billion euros in 2021.
This text provides general information. Statista assumes no liability for the information given being complete or correct. Due to varying update cycles, statistics can display more up-to-date data than referenced in the text.
P. Smith
Research expert covering apparel industry and general merchandise
Get in touch with us now
Published by P. Smith, Nov 24, 2022 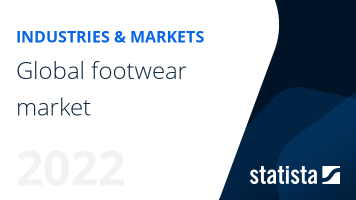 The most important key figures provide you with a compact summary of the topic of "Global footwear market" and take you straight to the corresponding statistics.