The global footwear market is a multi-billion U.S. dollar industry, comprised of sneakers, luxury footwear, athletic footwear, and sporting shoes, as well as other related goods. Footwear products are commonly made of leather, textile, and a range of synthetic materials. The United States has the largest footwear market in the world, generating over 78 billion U.S. dollars in revenue in 2021.

Previous generations may have survived with one or two pairs of functional footwear. Today however, the majority of people have a collection of footwear to meet various criteria and needs. Formal, casual, athletic: footwear come in a wide variety of shapes, styles, and sizes. As of 2020, the United States imported about 1.87 billion pairs of shoes. In 2021, the vast majority of shoes being imported to the U.S. came from countries in Asia. Footwear worth over ten billion dollars arrived from China alone in that year.

The revenue of the athletic footwear industry in the United States amounted to about 13.6 billion U.S. dollars in 2021 and is set to increase to over 18 billion dollars by 2025. Shoes, along with apparel, are increasingly seen as status symbols for consumers. Footwear brands and retailers play a huge role in catering to this market and these attitudes through their respective offerings and ranges as well as their advertising campaigns. For years now, Nike has held the largest share of the U.S. footwear market by far, and in 2020, the company accounted for a turnover of about 37 billion U.S. dollars.

Consumers spend significant amounts of their discretionary income on apparel and footwear. In recent years, athletic clothing and footwear has become very trendy and this segment has experienced strong growth in the United States. In 2021 alone, wholesale sales of athletic footwear generated approximately 20 billion U.S. dollars. Almost two-thirds of Generation Y had bought athletic footwear in the previous two years, according to a 2021 study. American women tend to spend more on footwear than men. In 2020, the average household expenditure on women's footwear in the U.S. amounted to 154.99 U.S. dollars.
This text provides general information. Statista assumes no liability for the information given being complete or correct. Due to varying update cycles, statistics can display more up-to-date data than referenced in the text.

D. Tighe
Research expert covering shopping behavior, sports and leisure retail, and the subscriptions and direct selling industry
Get in touch with us now
Published by D. Tighe, Nov 17, 2022

Revenue of the footwear market in the U.S.
78.61bn USD

Pairs of shoes imported into the United States
2.42bn

Average annual U.S. consumer spend on footwear in 2021, by age 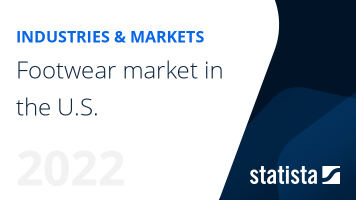 Go to report Footwear market in the U.S.
Top Seller

The most important key figures provide you with a compact summary of the topic of "U.S. footwear market" and take you straight to the corresponding statistics.