Consumer lending in its simplest terms is essentially the loaning of money for personal use, family, or household spending. Unlike larger loans that are secured against either assets or property, consumer loans in large are unsecured (except vehicle loans) and therefore come with a risk to both the financial body that supplied the payment as well as the individual that must pay back the loan. Consumer loans in general are used to stay ahead on bills, pay for goods, buy motor vehicles, furniture, or make home improvements. As of September 2021, consumer lending in the United Kingdom amounted to approximately 23.8 billion British pounds. The majority of the loans, with student loans excluded, were credit card loans.

How much debt do households in the UK have?

The total debt of households in the United Kingdom grew constantly during the last two decades, reaching an amount of around 1.87 trillion British pounds in 2020. This value was more than double the amount in 2000, and amounted to a debt level of around 50,200 British pounds per adult in the country. Despite the increase in debt, the household debt to income ratio - measured as the amount owed through loans to the gross disposable income of households - decreased overall during the last decade, from a peak of around 150 percent in 2008, down to around 130 percent in 2021. The rate above 100 percent, however, means that the average household in the UK has higher debt than income.

Mortgage lending in the UK

The outstanding amount of consumer credit was very small compared to the outstanding amount of lending secured on housing. The value of consumer credit outstanding to individuals in the country only reached around 10 percent of the total value of lending secured for housing. The value of gross mortgage lending dropped markedly in 2021, and was down at the lowest point of the whole last decade, at around 83 billion British pounds. This was around one fifth of the gross mortgage lending in 2007, before the global recession.
This text provides general information. Statista assumes no liability for the information given being complete or correct. Due to varying update cycles, statistics can display more up-to-date data than referenced in the text.
Published by Statista Research Department, Jun 7, 2022

Outstanding amounts of lending to individuals in the UK 2007-2022, by loan type

Average personal unsecured debt amount in the UK 2021, by type 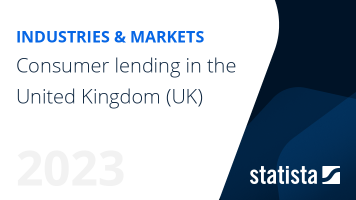 The most important key figures provide you with a compact summary of the topic of "Consumer lending in the UK" and take you straight to the corresponding statistics.