Published by
Raynor de Best,
Aug 27, 2021
A credit card is a plastic card issued by financial companies, usually banks or credit unions. It allows the holder to pay for goods and services based on the promise made by the holder to pay for them at a later date. Credit cards have become common place in personal finance over the last few years, their popularity is reflected clearly in the number of people who are credit cardholders.

The main benefit to the customer is convenience. Compared to debit cards and checks, credit cards allow the holder to take short-term loans without the need for calculating their remaining balance before making a transaction. Many credit cards also offer other benefits, such as cash back or airline miles, which often plays a role in the decision between different credit cards among consumers. Over 10 percent of credit cardholders chose their specific card based on the rate of earning rewards in 2019.

Possessing a credit card can also be seen as a great disadvantage as it may lead the consumer to make purchases they cannot afford. This can often result in difficulties for the cardholder in the form of credit card debt, which amounted to approximately 820 billion U.S. dollars in the second quarter of 2020. Some credit cards can often levy rates up to 30 percent if a payment is missed, some customers become so indebted to their provider that they are driven into serious financial difficulty and sometimes even bankruptcy. The level of credit card debt varies among states and age groups, with those between 45 and 54 years having the highest level of debt in 2018.

In the following 6 chapters, you will quickly find the 29 most important statistics relating to "Credit cards in the United States".

The most important key figures provide you with a compact summary of the topic of "Credit cards in the United States" and take you straight to the corresponding statistics. 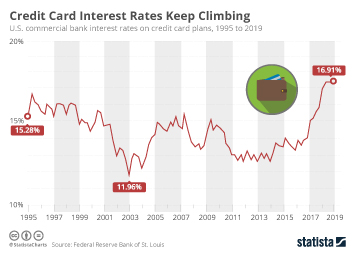 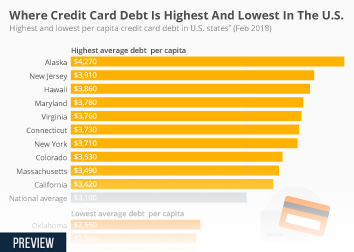 Where Credit Card Debt Is Highest And Lowest In The U.S.