Published by
P. Smith,
Nov 24, 2022
Primark is a leading retailer specializing in the sale of clothing, accessories and footwear. The company was started in Dublin, Ireland, in 1969 by the Weston family. After its success as Penneys, it expanded into other countries. The retailer now has 408 stores located worldwide, including the UK, the Republic of Ireland, Portugal, Spain, Germany, the Netherlands, Belgium, Austria, France, Italy, and the United States. Operating in the low-cost end of the market, the company is popular with shoppers seeking the latest fashion items at modest prices.

Primark is owned by the British food processing company Associated British Foods (ABF). In its 2022 annual report, ABF reported that its retail subsidiary had generated a revenue worldwide of approximately 7.7 billion British pounds that year, which was a significant increase on the previous year, which was heavily impacted by the coronavirus (COVID-19) pandemic. Accordingly, the company's growth rate in sales was greatly impacted, with 2020 marking a sales decline of 24 percent. In 2022, sales grew by around 40 percent.

Primark's performance in its primary market

The value of Primark in the UK, its primary market, has increased dramatically over the past decade, with stores in the country reaching a net worth of over one billion pounds in 2019. In the following years, this figure has remained stable, hovering around the billion pound mark, which is impressive considering the economic difficulties faced by the retail industry over this time period.

The vast majority of fashion store customers in the United Kingdom have heard of Primark, which had a brand awareness of 94 percent in 2022. Just under half of people who knew Primark said that they like the brand, and the same number have shopped there, showing the wide reach of Primark in the UK. By comparison, in the United States, these awarenesss and popularity figures were much lower. For example, only 28 percent of U.S. fashion store shoppers had heard of Primark.

In the following 5 chapters, you will quickly find the 25 most important statistics relating to "Primark".

Statistics on the topic
Revenue of Primark
7.7bn GBP
Sales growth of Primark at actual exchange rate
38%
Net worth of Primark stores in the UK
1.1bn GBP 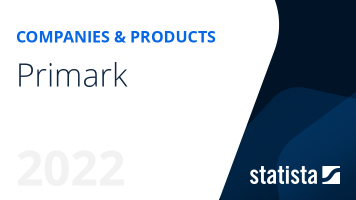 The most important key figures provide you with a compact summary of the topic of "Primark" and take you straight to the corresponding statistics.